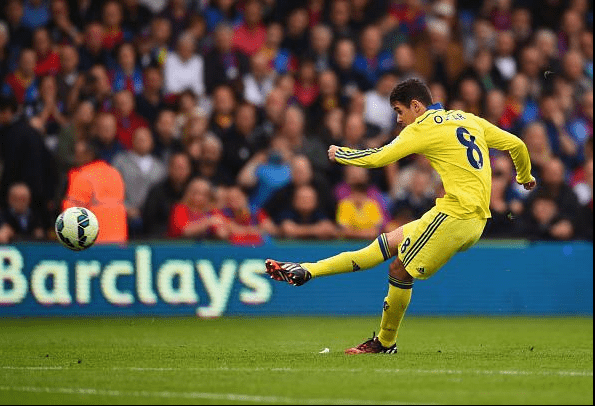 In March earlier this year, with title race still hanging in balance, Chelsea went to Crystal Palace and suffered a demoralising 1-0 defeat, after which Jose Mourinho claimed that his team lack balls. After today’s 2-1 victory, though not a classic and far from perfect, it is fair enough to say that this Chelsea team have got their ‘big balls’ back.

What Jose wrote in my notepad about his teams attitude today v crystal palace pic.twitter.com/eMJbQMJE9j

Still unbeaten, the juggernaut rolls on

The comparisons with Arsenal’s invincible are still premature at the moment, but Chelsea have started their season strongly and are showing hardly any weakness.

Eight games unbeaten, seven wins and a draw, 23 goals scored and only eight conceded. Five points ahead of nearest challenger Manchester City and less said about the gap with other title challengers, better it is.

It was yet another typical Chelsea away performance – strong at the back and dangerous in counter attack. That has been the hallmark of last season as well, what has changed really is the attitude and self belief among the players. They usually take the early lead and half of the battle is already won. And when pressure is applied against them, they stay resolute and see off the challenge till the final whistle. Big balls.

Against Palace, they had 14 attempts on goal, with 11 of them created from open plays. The Blues had 72% of ball possession in the match with 96% of passes (767 attempted) were short passes.

Recently I came across a debate in social media, where several Chelsea fans complained that Oscar’s flair, creativity and guile attacking wise are being curtailed, as Mourinho wants the Brazilian to become more of a team-man than a selfish attacking forward like Juan Mata. He is given the licence to attack, create, and score goals but at the same time he is asked to track back and defend as well.

Apart from a world class goal, he had three shots in the match, 88% passing accuracy and made 38% of tackles.

“I can’t complain about Azpilicueta’s red card” said Mourinho after the match. It was a poor and reckless challenge from the Spaniard and was rightly sent off. Check the video (via @UKSportswire) below; you can clearly see it was nearly a two footed lunge, a bad sliding tackle.

Likewise, Damien Delaney was rightly sent off after two bookable offence. It was really stupid from the Irish midfielder. The outcome of the match could have been different had Palace maintained the pressure with an extra man advantage.

Football is a beautiful game and when it is played beautifully, nothing gives more joy to a football lover, irrespective of which club you support. For example, take the case of Fabregas’s first Premier League goal for Chelsea. What movement! What sleek passing! This is pure class. Enjoy the video (via @Feroze Ali)

Reflection on the home team

I personally think Palace played well. The two goals they conceded were because of superior class shown by their opponents.

Interesting to note, they still kept going till the very end; the jaws didn’t drop down even after going 2-0 down. Campbell was a constant threat in the box and could have had at least couple of more goals to his name had been been more clinical in the first half.