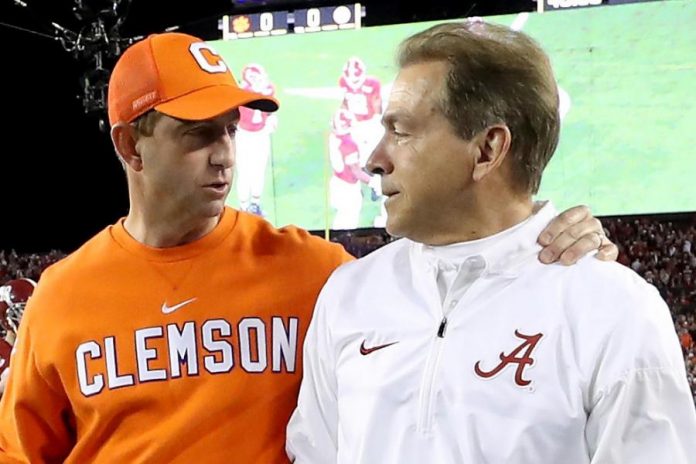 After the excitement of Saturday’s week ten games had died down, the AP Top 25 Poll and the Coaches Poll were released on Sunday. It was not pleasant reading for Clemson and Alabama fans as their teams slipped outside the top ten in the coaches poll while Alabama clung onto the tenth spot in the AP Poll. The College Football Playoff selection committee will announce their rankings on Tuesday.

Defeats for Alabama and Clemson cause slide in rankings

Clemson and Alabama were both defeated this Saturday and their position in the CFP is in jeopardy as a result. In the latest polls, both teams are well outside of the top four places.

Clemson suffered defeat at the hands of Notre Dame on Saturday and as a result slip from fourth in the CFP rankings to 12th in both the AP and Coaches Polls for week 11.

Meanwhile, an overtime defeat at the hands of LSU means the Crimson Tide also slide down to tenth in the AP Poll and 11th in the Coaches Poll. However, some pollsters still ranked Bama ahead of LSU, which made the LSU Barstool Twitter account unhappy.

Don’t let the joy of yesterday distract you from the fact that atleast 4 (maybe more) voters put Alabama ahead of LSU in this weeks AP poll after we beat them literally last night. I want answers pic.twitter.com/LqOSWHMnvZ

Elsewhere, in the biggest game of the season so far, Georgia came out on top against the Tennessee Volunteers. This moved Tennessee to fifth in the polls, while Georgia was polling almost unanimously as the number one team in college football.

TCU entered the CFP spots at four after a big win against Texas Tech. Ohio State at two and Michigan at three round out the top four of both polls.

There were two voters that did not have Georgia number one in the Coaches Poll. They have victories over Oregon and Tennessee who sit at five and six, but apparently that’s not enough for some.

The latest Coaches Poll#UGA gets 61 out of 63 first place votes, sitting with wins over No. 5 and No. 6. pic.twitter.com/ZcymveB6ze

Of course, at this point in the season, none of this really matters as we all wait for the CFP selection committee’s rankings, which will be released on Tuesday.