Last week Vidal gave an interview to Tuttosport where he claimed that he is happy in Turin and wants to continue his career with Juventus. It seemed like he is well settled in Turin despite rumours of strong interest from Manchester United.

However, his brawl at the night club prior to Juventus’ biggest game of the season against Roma has changed his position at the club. He was fined by Juventus and was dropped to the bench against Roma. He returned to the training late the following day, his body language was unprofessional while several reports claim that he didn’t even shake hands with his manager.

Tuttosport is concerned that something fishy is going on here. They find his behaviour ‘very strange’ and even questions his so-called public love for Juventus. 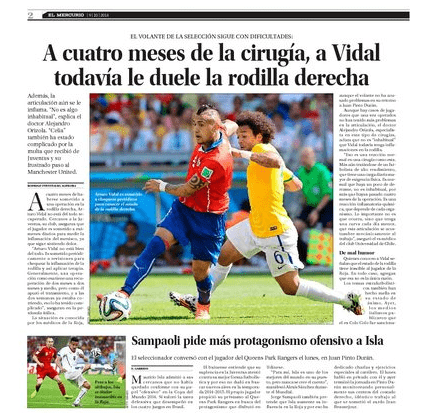 Chile newspaper El Mercurio has covered a story on Vidal with great details today. The newspaper claims that Vidal got late to training because he was out parting in the night and was fined, and probably he’s unhappy with the United deal not having gone through in the summer.

Jorge Sampaoli, the Chile coach adds that one of the reasons why his proposed move to Manchester United failed was because Louis van Gaal had doubts about his knee.

Manchester United are in need of a world class central midfielder and the Red Devils might tempt Juventus to sell Vidal in the January transfer window with a big money offer. Going by the media reports in Italy, it feels like Juventus could sell Vidal as well, provided the offer is right.