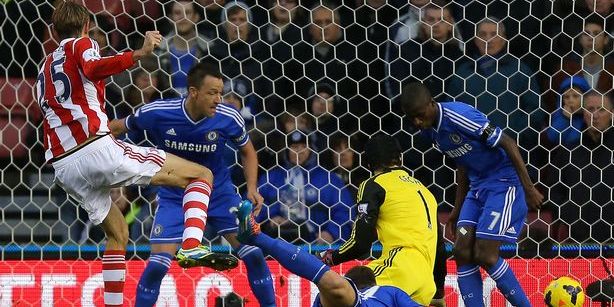 Upon the Portuguese pitching up once more at Stamford Bridge, everyone expected Jose Mourinho’s Chelsea to return to the days of impenetrable rearguards, and record-breaking defensive solidarity.

But despite still being in the hunt for the title, the Blues’ defence has often been far from secure this season; and with only one clean sheet in their last ten games, it seems all is not well at the back.

Gary Cahill has come out in vague defence of his colleagues, insisting that the Blues will soon shore up their shaky defence,

“Of course, you can tidy up on mistakes, but they’re not major, major mistakes,” Cahill told the Mirror,

Having conceded seven goals in the last three games to Southampton, Sunderland and Stoke; we at Soccerlens have taken it upon ourselves to analyse each and every one of these goals, in an attempt to ascertain the cause, blame and potential for remedy.

Conceded in the very first minute of the game, it was clear that this was a hugely unfortunate error from Chelsea’s Michael Essien in the middle of the park. Awkwardly volleying the ball inadvertently into the path of the onrushing Rodriguez, the Ghanaian gave his defenders absolutely no chance. Jose Mourinho has come out in defence of his long-serving player; and it must go down as a mistake.

Chelsea’s captain has never been lightning fast, by any stretch; but he allowed the Black Cats striker, Altidore to turn inside the box, and fire in his first goal for the club from 10 yards. Far too easy for the American.

The first in a number of examples of poor set-piece defending from the Blues. This time it was Lampard and Azpilicueta who failed to deal with a corner at the near post; with the ball bouncing kindly to O’Shea to stab home.

Another set-piece, and another goal conceded for the Blues. Mikel backs out of the original challenge, thereby allowing the ball to bounce; then Ba lets Phil Bardsley get away from him in the box, with the Senegalese too interested in not conceding a penalty. The easiest of finishes in the end for the full-back.

Despite towering above the rest of the players, Crouch managed to collect the ball in the box…with his feet! Branislav Ivanovic failed to win the initial header (once more from a corner), Petr Cech had strayed into no-mans-land, and the rest of the Chelsea defence stood idle as the England striker smacked the ball into an unguarded net.

Spanish fullback Azpilicueta has been playing out of position lately; and while he has put in some impressive displays, he is not fully at home on his unfavoured left side. He was beaten for pace by Jon Walters, who then fed Ireland in the middle. The Chelsea midfield dawdled behind the Stoke midfielder, who had all the time in the world to curl in a lovely effort. The Blues’ defensive midfield needs to provide greater cover.

Despite the Chelsea midfield being entirely missing up the other end of the pitch in search of a winner, there can be no real blame attached to this thunderbolt from Assaidi. The Morrocan cut inside, but was so quick to unleash his shot that Ivanovic and Cahill had no chance, with Cech throwing himself helplessly at the goal-bound strike.

Conclusion: When Gary Cahill said that ‘little bits and bobs’ were causing the problems at the back, he wasn’t too wrong. The Blues have made some silly mistakes over the past week, but almost all of them have led to goals, which is quite unusual.

What is clear is that their central midfield is lacking in depth. It should be of paramount importance to Mourinho come January to bring in at least one world class central midfielder; ideally one with good defensive awareness, and also a good passing range.

Chelsea’s back-line, who almost singlehandedly won the Champions League in 2012, have to be more assertive. No-nonsense defending must be on the agenda for the vulnerable Blues, who must patch up now, or risk falling behind in the race for the Premier League crown.