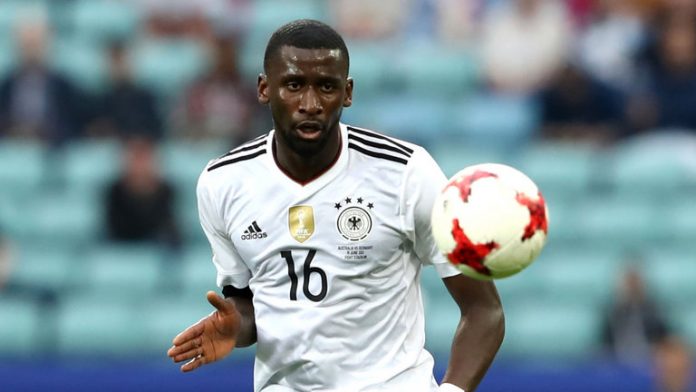 Chelsea have agreed a £34 million deal to sign Antonio Rudiger from AS Roma, according to Sky Sports. The German will take a medical in Los Angeles this week before being officially announced as a Blues player. The defender could become Chelsea’s first summer signing of the window, ahead of Tiemoue Bakayoko and Alex Sandro.

Rudiger can play in the middle or on either side of Antonio Conte’s 3-5-2 system at Chelsea. At 6 feet 3 inches, he is an imposing presence with surprisingly deft feet.

The Blues were initially targeting Southampton’s Virgil van Dijk and Juventus’ Leonardo Bonucci. However, neither deal went through and they turned their attention to Rudiger. The Roma man has also come at a much cheaper price than either van Dijk or Bonucci would. It remains to be seen if Chelsea sign any more centre-backs, with both Nathan Ake and John Terry leaving in the summer. Andreas Christensen has returned from his loan spell at Borussia Monchengladbach.

Rudiger was part of the Germany team that won the Confederations Cup in Russia recently. He played as the middle man in a back 3 for Joachim Low’s side, and was able to stifle the threat of Alexis Sanchez against Chile in the final. It remains to be seen if he can adapt to life in the Premier League, but Chelsea will be pretty happy with the acquisition.

Conte will hope the club can go out and get his other targets as well. The Blues have been dealt a hammer blow with news that their target Romelu Lukaku is close to joining Manchester United. This means they now need to seal the deals for Bakayoko and Alex Sandro quickly before getting on to a striker. Diego Costa is almost surely leaving, with Atletico Madrid expected to make a bid any day now.