According to reports in the Guardian, Chelsea are reportedly exploring the possibility to sign Real Madrid youngster Raphael Varane from the Spanish capital in the summer.

The 21 year old Frenchman who played a significant role in Real Madrid’s triumph in the Champions League final last night against Atletico Madrid is on the wishlist of Chelsea manager Jose Mourinho. 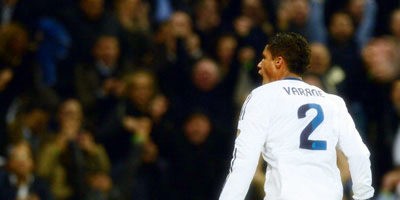 Varane has been earlier described by Mourinho as the “best young centre back in the World” during the Portuguese’s reign at Bernebeu last season. However, injuries have halted Varane’s progress this season, with the Frenchman featuring in only 21 appearances for the Galacticos this campaign.

Varane would ceaselessly fit in the Chelsea back four which has been parsimonious this season in the Premier League. However with club captain John Terry ageing with each passing day and David Luiz making the switch to PSG, Mourinho could pair the youngster beside Gary Cahill in the heart of the defense.

The young defender possess a calm head on young shoulders and his maturity is beyond his tender age. Moreover Varane doesn’t commit himself into tackles and is a ball playing defender like Cahill, which would effectively see Chelsea play out from the back.

The degree of certainty of the deal however seems like a puzzle. The Blues have Branislav Ivanovic who can fit in at centre back while Kurt Zouma will be at Stamford Bridge from St Etienne after being bought in January but then immediately loaned till the end of the season to the French club. Another youngster Thomas Kalas, who featured in wins over Liverpool and Cardiff would also seek first team involvement next season.