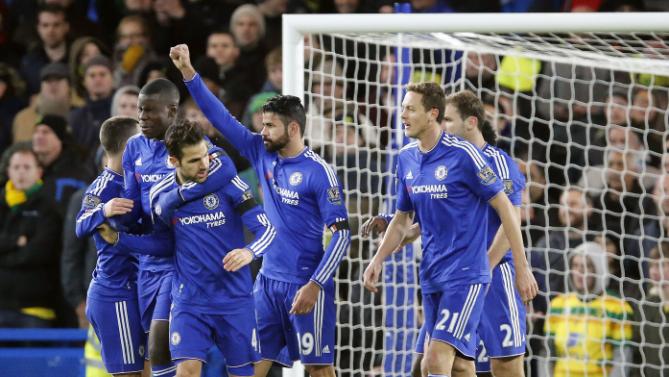 It was relief at last for Chelsea as they avoided a fourth straight league defeat with a 1-0 victory at home to Norwich City. Diego Costa ended a run of 500 minutes without a goal with the winner in the 63rd minute.

The Blues came into this game in 16th place, a place behind their opponents. This win has lifted the defending champions only one place, but the performance will given Jose Mourinho’s men a lot of confidence going forward. There was a sense in their last fixture against Stoke City that their display didn’t get the result it deserved, and there was a feeling of wariness and unease last night as well before Costa’s strike. As a result, the goal and the subsequent three points gave everyone around Stamford Bridge a massive lift.

After weeks of looking indifferent and toothless, the senior Chelsea players have stepped up to the plate in the last couple of weeks. The likes of Cesc Fabregas, Nemanja Matic, John Terry and Eden Hazard all had very good games yesterday. Even Branislav Ivanovic, who has come under so much criticism this season, looked more convincing. It was great to see Chelsea resembling the side that won the Premier League so emphatically last season, dominating possession and playing some quick and incisive football.

Of all the individual players mentioned above, Hazard in particular was outstanding, looking very much like his old self as he looked to take on an opposition defender every time he was on the ball. The Belgian’s return to form will automatically give the whole Chelsea side a lift, seeing how much he contributed last season. There is no doubt that on his day, he is one of the best players in the world and the old adage – Form is temporary, class is permanent, was proven right again yesterday. If he continues in a similar vein for the rest of the campaign, the Blues will catapult up the table in no time.

Chelsea may have broken their three-match losing streak, but they will have to make sure that their feet are firmly on the ground. The Blues travel to White Hart Lane next week to take on Tottenham Hotspur, who haven’t lost since the first game of the season. They also face the top 2 – Leicester City and Manchester United, in the next month. Their fortunes will have turned around completely only if they get through this period unscathed.

No matter how badly they’re performing or where they are in the table, Chelsea and Mourinho are always going to be associated with the title race. When asked about retaining their crown after the Norwich game, the manager said that it was impossible. Man City and Arsenal both lost yesterday though and are only 12 points ahead of the Blues at the moment. With the inconsistencies and increased competition, it does look very much like the Champions this season are going to finish with a much lower points tally than usual. With 25 games remaining, if the Blues can put together a run and reclaim their form from last season, anything could yet happen.

We analysed last week what Chelsea’s realistic targets for the season should be and while getting into the top 4 is still the top priority, going one step better cannot be completely ruled out.

5) Lots of positives for Norwich City

Norwich City gave a very good account of themselves, coming close very close to taking the lead on a couple of occasions in the first half. They did have their goalkeeper John Ruddy to thank for keeping them level at half-time, but were in general very compact at the back. Alex Neil would have been very pleased indeed, and this performance will give them a lot of confidence going forward in the season. They are currently in 16th and are sure to be engaged in a relegation battle, but proved that they have what it takes to pick up points at regular intervals both home and away.