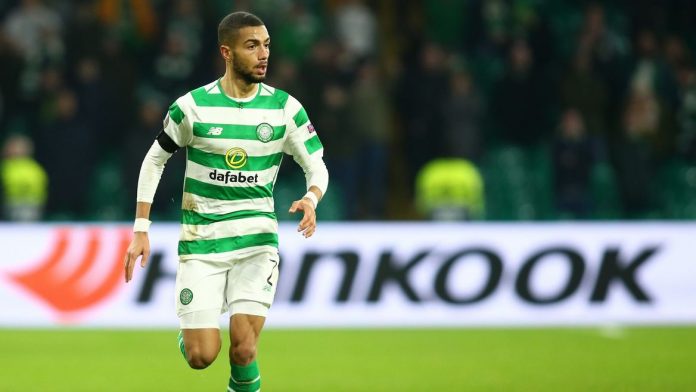 Celtic picked up a 4-1 win against Motherwell in the Scottish Premiership today.

Scott Sinclair, Odsonne Edouard and Oliver Burke scored for the home side to cancel out Gboly Ariyibi’s goal. The defending champions are now eight points clear at the top of the table and Brendan Rodgers will be happy with the result.

Celtic did well for most parts of the game but they can improve in certain areas.

Full back Jeremy Toljan had a poor outing for the home side and Rodgers should look to address that going forward.

The Celtic full back is often over aggressive and his defensive frailties are costing his side as well. The 24-year-old is on loan from Dortmund.

Toljan struggled against Ariyibi all game and Motherwell had a lot of joy down his side.

The player is clearly talented but he needs to work on his defending. Toljan also needs to curb his aggression a bit.

Celtic fans have taken to Twitter to share their thoughts on the defender’s display today and here are some of the fan reactions.

Sign big ajer for life, toljan is pish btw. Some result that with the team on the park

Toljan got tortured by that Motherwell winger. Run him ragged.

Toljan = not overly impressed yet.

Still need a RB, Toljan is weak. Decent on the ball, good link up going forward but gets exposed positionally and physically time after time. No better than an aging Lustig.

A biggie on Wednesday. Toljan continues to worry me, atmosphere could get to him I think. Be interesting to see which 2 play in beside Brown

Toljan really struggled with their left winger (goal-scorer) all day. He was ahead of him when the first shot was taken and allowed the scorer to run past him.

Lustig is a better defender than Toljan and wouldn’t have had any problem with Motherwell’s cheaty but decent Ariyibi. #UnpopularOpinions @90MinuteCynic