Spanish midfielder Ander Herrera is currently in Manchester to secure his £28.8m move to Manchester United. He was at United’s training ground, Carrington, along with his agent yesterday, with the official announcement is likely to be announced today. 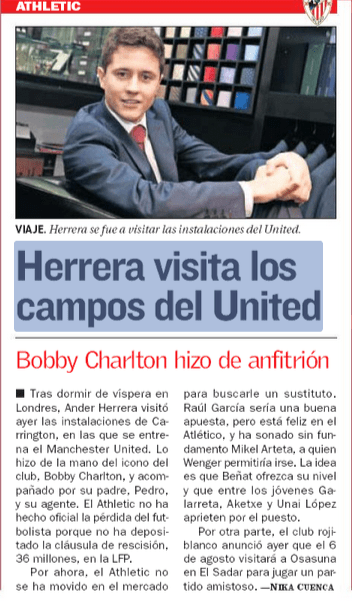 The 24-year-old midfielder will become the first major signing of new manager Louis van Gaal, who is expected to delve into the transfer market again to sign few more top players as he undertakes the rebuilding program at Old Trafford.

Herrera was a target of United last summer, but the deal didn’t materialise then. However, United didn’t the miss the opportunity to sign him in their next attempt, after they triggered his £28.8m release clause.

The Spaniard will pen down a five year contract at Old Trafford while will earn around €3m per year wages. He has successfully completed his medical back home and expecting to get hands of the Red shirt within Friday.

Spanish newspaper AS reports that he and his father was greeted at the club by none other than legendary Sir Bobby Charlton. We are all expecting for an official announcement today!