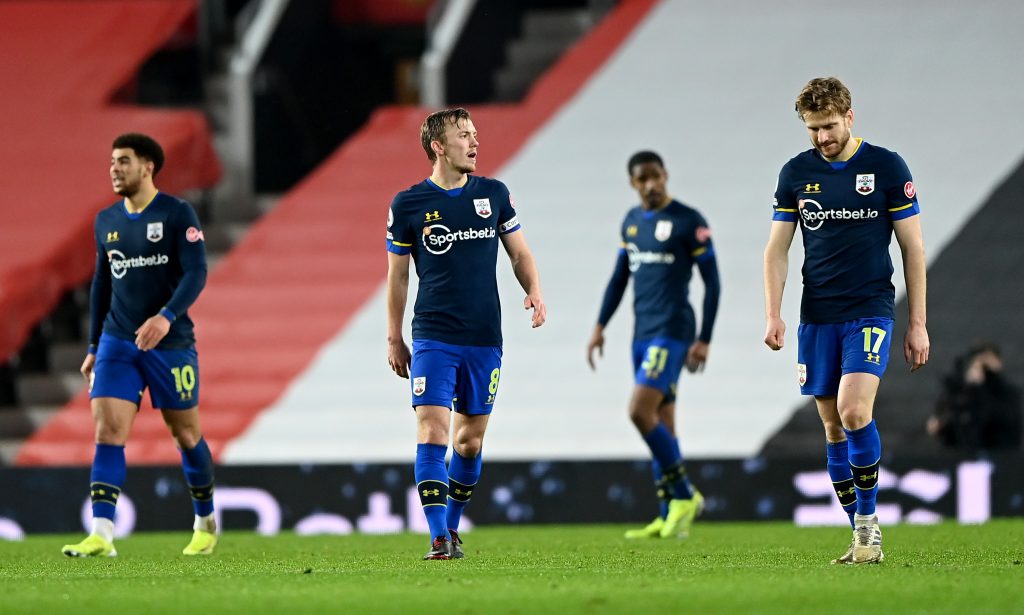 That is the exact predicament Southampton are finding themselves in after getting battered by Leicester City in October 2019, and Manchester United yesterday night.

But, both defeats are so very different to each other for a variety of reasons, so let’s quickly go over both matches once again:

When Leicester City travelled to Southampton on matchday 10 of the 2019/20 season, the Saints were languishing precariously close to the relegation zone in 17th. They had won only two of their previous nine matches, losing five others.

Leicester, on the other hand, were absolutely flying in third place, having won all but four of their matches and drawn two of the others. Basically, the two sides were on opposite ends of the table, and consequently, in contrasting spirits.

After a good start, Leicester opened the scoring in the 10th minute. A couple of minutes later, Ryan Bertrand was sent off for a stupid challenge on Ayoze Pérez, and then the goalscoring heavens opened up.

Leicester’s wide men wreaked havoc on the depleted Southampton side, with Pérez getting a hat-trick, Ben Chilwell scoring once and setting up two others and Harvey Barnes joining the fun too (sadly he did not have any equaliser to score). 5-0 at half-time, 7-0 before the hour-mark, and 9-0 in stoppage-time.

There were no excuses for this defeat – Southampton lost on merit. They had only two injuries to contend with, and none of them were to star players. Yes, they went a man down early on, but there can be no excuses for letting in nine goals for a Premier League side.

Seeing Ralph Hasenhüttl get the sack immediately after that would be understandable – even expectable – yet Southampton persisted with him.

Both he and the players must be given immense credit because despite failing to win the next three matches, they turned things around. From 18th, they surged up to 11th with 13 wins from matchday 15 onwards. It was a truly remarkable turnaround, and it continued.

The Saints lost their first two matches of 2020/21, but turned things around very quickly thereafter with just one defeat and seven wins before matchday 13, which saw them climb up to the podium spots.

Things had slightly slowed down since, though, and they went into the United match on a run of three consecutive defeats. But, in the grand scheme of things, absolutely no one would have expected to see them doing this well after that 9-0 against Leicester.

The pretext to United versus Southampton read in a very negative tone from the Saints’ point of view. They had nine senior players out injured (three of whom went out in the last half-hour against Aston Villa), so some youngsters were handed full debuts. United were in the runners-up spot going into the match, but with no wins in their last two clashes, they undoubtedly were very hungry.

Just 78 seconds in, Alex Jankewitz was sent off for an utterly stupid and inexplicable challenge on Scott McTominay. Tactically, this was the biggest disaster possible.

Getting a red card is bad for any team, but for Southampton, it is particularly worse, especially when facing United, as you will see below.

United are a side that thrive in open games where they can quickly play their way through teams. Against low blocks, the Red Devils are not so good, as was made evident by Sheffield United.

Southampton, on the other hand, have been transformed into a high-pressing side by Hasenhüttl. Low blocks are not exactly their thing, and with a man down, they couldn’t press properly either.

Here is how Southampton lined up at the start of the match: 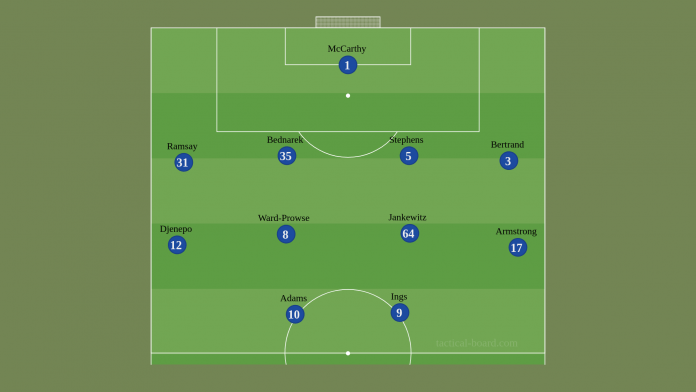 Alex McCarthy kept his place in goal, with Kayne Ramsay making his second-ever start in front of him along with Jan Bednarek, Dale Stephens and Ryan Bertrand in the back-four. Moussa Djenepo, James Ward-Prowse, full-debutante Alex Jankewitz and Stuart Armstrong were in midfield, with Che Adams joining Danny Ings up top in a 4-4-2. 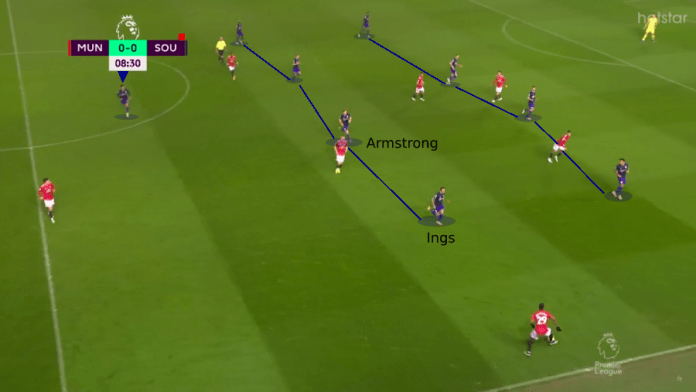 After the red, Southampton switched to a 4-4-1 as Ings dropped to the left of midfield with Armstrong tucking inside. 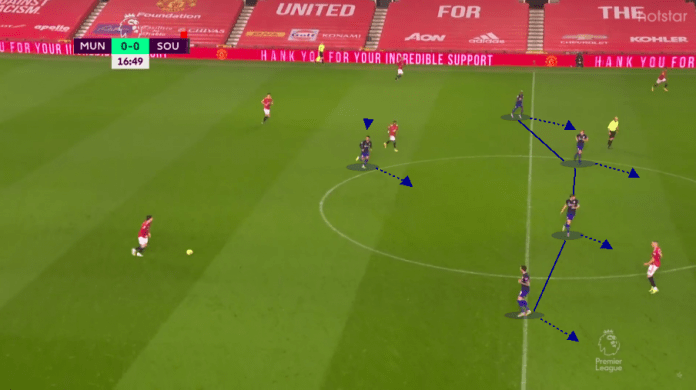 Due to the numerical disadvantage, Southampton could not apply their usual high press, so they retreated into their own half in their 4-4-1 when out of possession. 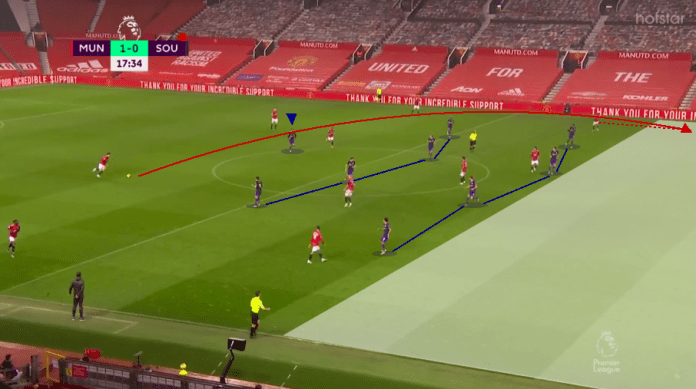 Yet, their defensive line did not retreat to the edge of their box and stayed relatively high, leaving open space in behind. So, a simple long ball was enough to unlock the Saints, and it was very easy to play that due to the lack of a press. 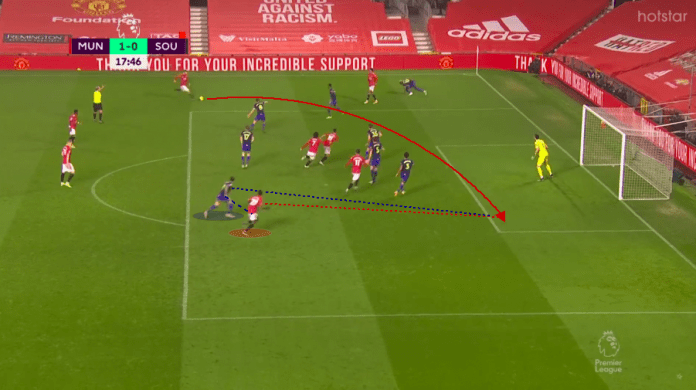 The last straw was Ings in the left of midfield. Being a striker, tracking back is, of course, not one of his greatest strengths, so Aaron Wan-Bissaka had an absolute field day attacking on the right. The fact that he got more touches than just three other players on the pitch tells you all you need to know about how much fun he must have been having. 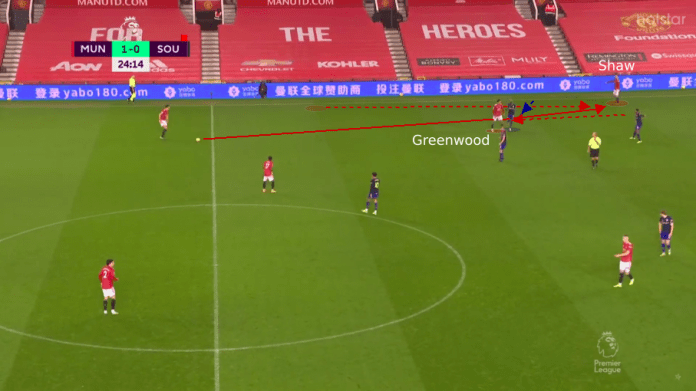 As we saw in the last instance with Wan-Bissaka, the United full-backs could push very far up the pitch with fewer attackers to worry about. This was often facilitated by the winger dropping back and inside, dragging the Southampton wide midfielder away. That is exactly what Mason Greenwood is doing here to let Luke Shaw advance.

This move advanced through Shaw on the left, who set up Greenwood to assist United’s second. 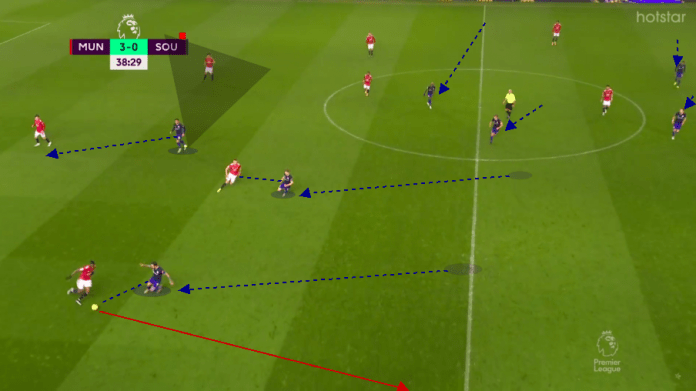 In the rare event that Southampton did press with intent (which only happened once or twice), they were made to pay. Naturally, they only tried to do so when the ball went out wide because they were lacking a striker centrally. 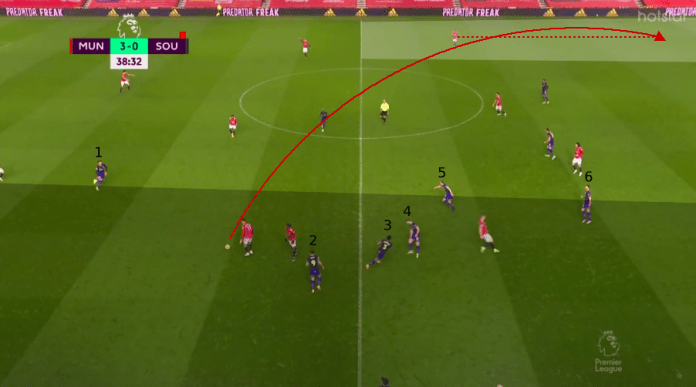 But, with a numerically depleted side attempting to press on one flank, it became way too easy for United to carve them open by overloading on one side before sending a crossfield to the other. As Greenwood is preparing to play a crossfield to Marcus Rashford (who is freer than the daily meals for school children that he has been campaigning for), six of Southampton’s nine outfielders are on the left wing.

Rashford then advanced with a whole prairie to himself, and the move culminated in United’s fourth goal.

With the problem of width seriously plaguing them (and after realising the press-istance was futile), Southampton switched systems at half-time. 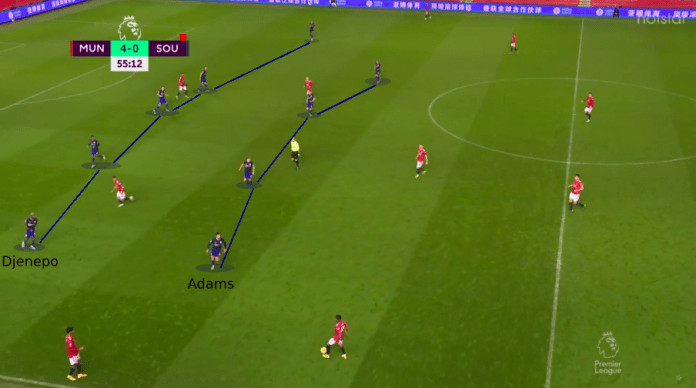 Hasenhüttl decided that a 5-4 was the way forward in the second half, so he asked Adams to drop to the right of midfield with Djenepo shifting to right wing-back. With this, Southampton abandoned all forms of pressing and dropped deep into their own half. 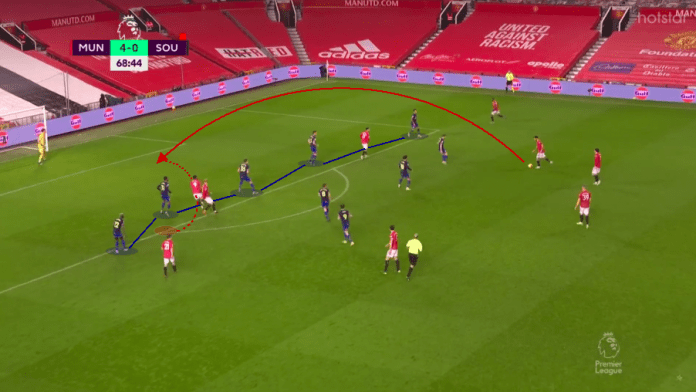 The issue with this, though, was that Ramsay (who was making his second league appearance, mind you) had to shift to the unfamiliar role of centre-half. That ended just as well as you would expect – United (and substitute Anthony Martial to be more accurate) attacked him fairly often in the second half, profiting heavily again. In this particular instance, Martial is running across the makeshift centre-back to get on the end of a Bruno Fernandes cross and make it 5-0. 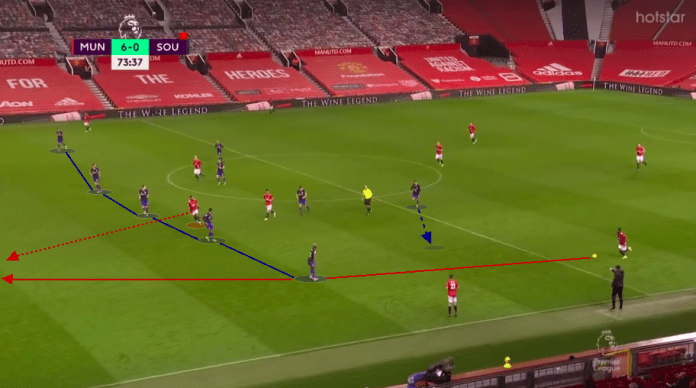 Here is another example of that, featuring one more problem for Southampton – Adams is out of position because he was slow to retreat from a counterattacking situation. You can see that he is not on the right of midfield, which allowed Fred (who had been shifted to left-back for the second half) to pick a pass as he wished.

His choice was Martial, who was once again attacking the half-space between Ramsay and Bednarek. The rest of the side wasn’t fully in position either (which explains the space in behind the defence). The Frenchman went through on goal, and as he tried to chip the keeper, his true finishing instincts kicked in – he missed wide. 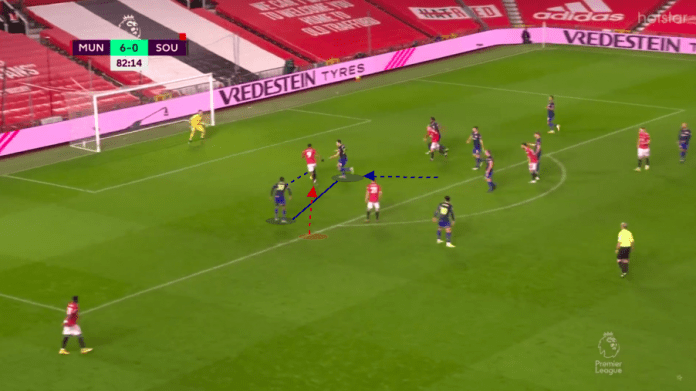 The second red card came from such a situation too – Martial ran in between Ramsay and Bednarek, and with the youngster failing to track him, the Polish international tried to make a last-gasp challenge, which, quite like his side’s day, did not quite go according to plan.

Southampton got a bit Bednarekt thereafter, so it’s best that we don’t look at anything further, just for the two brave Saints fans who might have gathered the courage to click on this.

It is easy to blame Hasenhüttl for this because he played multiple players out of position after the first red card and got an expected result from them, but you have to remember, he had nine players out injured, and as the Austrian manager himself said in the post-match press conference, he had no alternatives – no players on the bench, no alternatives to defend better.

As they did last season, Southampton must pull together and find a way through this chaos, albeit with a depleted squad. Their next two matches see them face Newcastle United and Wolverhampton Wanderers, two sides who have disappointed so far this season but are on the up recently. These could prove to be telling matches for the Saints.

As for Manchester United, this win will certainly be a huge confidence boost to them, particularly after the loss to Sheffield United and draw against Arsenal.

Domestically, Everton, West Bromwich Albion and Newcastle United make it a relatively straightforward league schedule for them, but in the midst of that, the Red Devils have a huge Europa League tie against Real Sociedad. This run could easily decide their success or failure this season.