Chelsea’s title defence got off to a wobbly and uncertain start as they were held to a 2-2 draw by Swansea City at Stamford Bridge on Saturday. We look at the analysis and reaction from the game that could have actually gone either way in the end. The Premier League table hasn’t yet started to take shape, but this match certainly gave us some indications on how these sides will do for the rest of the season.

In a game that saw the Blues take the lead twice, Thibaut Courtois was sent off early in the second half after a foul on Bafetimbi Gomis that also saw the visitors awarded a penalty. The Frenchman duly converted to level things up, before neither side was able to force the issue and get that all-important winner.

The team news saw a slight surprise, with Diego Costa starting. The Spaniard was a major doubt with a hamstring problem, but played and went on to last the whole 90 minutes. Swansea handed a debut to summer signing Andre Ayew. The Ghanaian’s arrival from Marseille had created quite a hype, and everyone was looking forward to seeing how he fared in the Premier League.

The Welsh side began brightly and it was a very open and lively game right from the start. Gomis had a couple of great chances to score, but he headed wide from a corner before John Terry’s last-ditch tackle thwarted him.

Oscar opened the scoring for Chelsea with a free-kick into the box that eluded everyone and went straight in. This was expected to settle Chelsea, but Garry Monk’s men weren’t going to go down with a fight. They found their equaliser 6 minutes later through Ayew, who bundled in a left-footed finish on his debut after Courtois had pulled off an incredible save to deny Gomis.

Chelsea were in the lead once again just a minute later though, in slightly fortuitous fashion. Willian’s low drive into the box took a deflection of Federico Fernandez and looped over Lukasz Fabianski.

Despite the lead, there was a sense that this game was nowhere near over yet, with the Swansea midfield comfortably playing Gomis in behind the Chelsea defence time and time again. John Terry and Gary Cahill looked a bit rusty and even though they played the offside trap successfully more often than not, there was a slight sense of uncertainty.

It was a ball over the top that brought about the game-changing moment as well. Jonjo Shelvey’s ball over the ball was collected by Gomis, who was being played onside by Willian. Courtois came out but the striker got past him and went down under the Belgian’s challenge. Referee Michael Oliver awarded a penalty and got out his red card, both of which were contentious decision. While there is little doubt that it was a foul, there is plenty over whether it was inside the box or not. Also, with Gomis going away from goal and both Terry and Cahill backing up, the sending off seemed harsh. 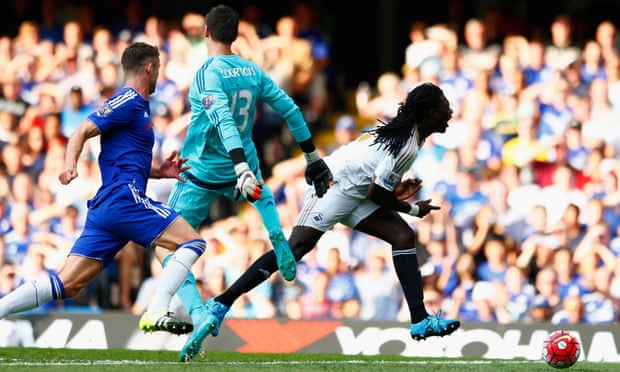 Asmir Begovic’s first job in a Chelsea shirt was to stop a penalty but he was unable to do so, with Gomis sending him the wrong way. The game was very open thereafter, with both side looking good to snatch a winner. Swansea tested the new Chelsea number 1 on a couple of occasions, but he was equal to the task. The home side saw two efforts from Hazard and Radamel Falcao saved by Fabianski, but were unable to create any clear-cut chances against a solid Swans backline.

The major talking points from the match though, can be summarised as follows:

1) Contentious red card, but Swansea were good value for the draw

We’ll never know what would have happened if Chelsea had had 10 men on the pitch following the penalty. Mourinho chose to withdraw Cesc Fabregas and bring in Kurt Zouma for the last quarter to make sure they didn’t lose the game. But there is no doubt that the away side were absolutely brilliant and fully deserved the draw. They took on Chelsea right from the start, with Jonjo Shelvey running midfield and Jefferson Montero running Branislav Ivanovic ragged on the left. Bafetimbi Gomis was in the thick of things all the time, and finally got his reward in the second half. It’s going to be a very exciting season for the side from Wales if they can continue in the same vein.

Mourinho’s sides have been built on defensive organistion and discipline, but there was no sign of that yesterday. Chelsea let a lead slip twice and were cut apart time and time again by Swansea. Terry and Cahill were good for most parts, but will be disappointed with the number of openings Gomis got. Ivanovic, on the other hand, was out-of-position on nearly every occasion the ball was played out to Montero, and couldn’t deal with the Ecuadorian’s pace either. There is lot of room for improvement there, and it may not be too long before we see some changes. 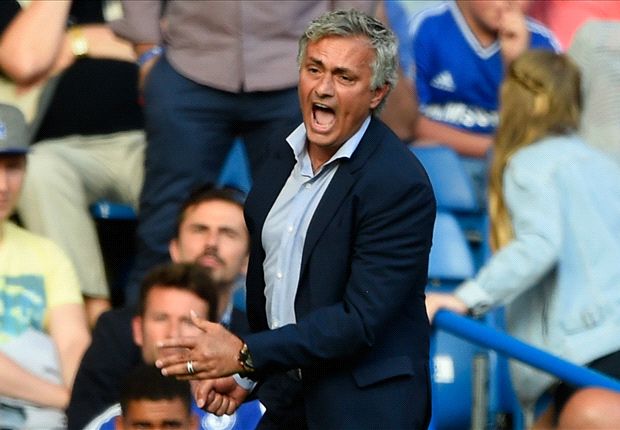 Leagues aren’t won or lost in August, but being winless in the first two games is certainly not an ideal way to start. Chelsea would have been looking to go the Etihad Stadium next week with 3 points to their name, but now the picture is completely different. A loss at the home of the 2014 champions would mean 1 point from 2 games, and with trips to West Brom and Everton coming up, the Blues faithful will be filled with dread.

This is what the Premier League table looks like after Saturday’s results: 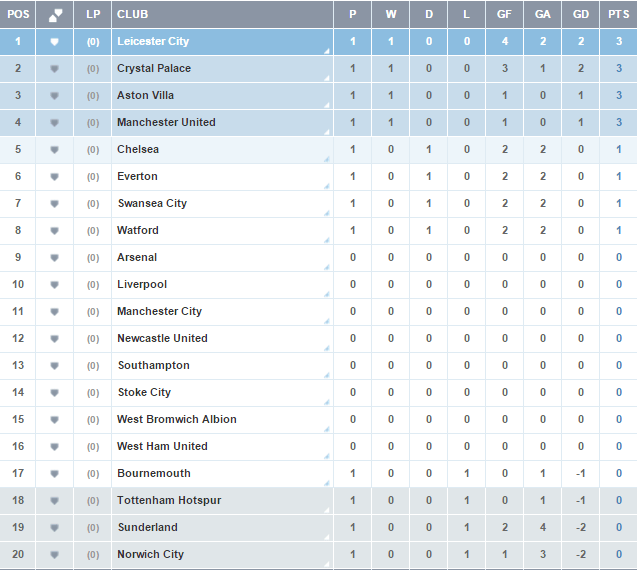