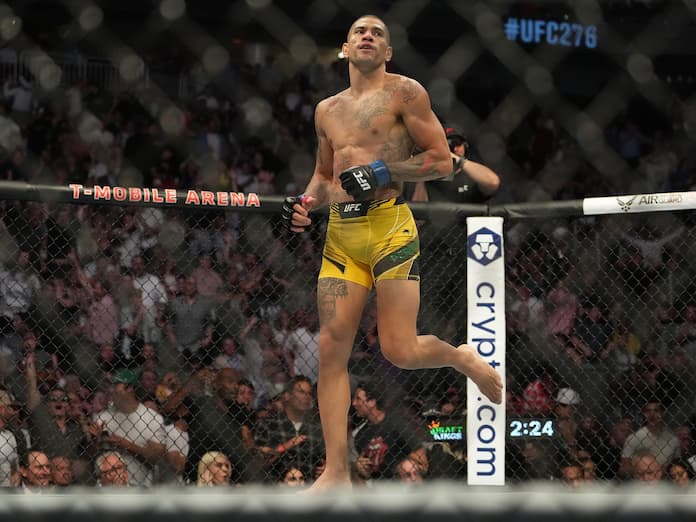 ALEX PEREIRA has taken to Twitter ahead of his UFC 281 main event clash with Israel Adesanya on November 12th. The Brazilian has released a video of him sparring whilst on a hoverboard ahead of his first UFC Title shot in six weeks time.

Ahead of his first shot at UFC gold in just over a months time, Alex Pereira has released an insane training video. The video appears to show Pereira sparring whilst balancing on a hoverboard.

Pereira and Adesanya headline the huge card that is UFC 281 at Madison Square Garden on November 12th.  Adesanya and Pereira have in fact faced each other previously, with the pair of middleweight squaring off in a kickboxing fight on two occasions.

The Brazilian won both of those fights, so is looking for the hat-trick of wins over the UFC Middleweight Champion. Pereira won the first via unanimous decision in 2016 at Glory Of Heroes 1. He then followed that up with an emphatic left hook knockout of Adesanya at Glory Of Heroes 7 a year later.

The pair are set to do battle for the third time on November 12th, with both fighters training hard ahead of the scheduled bout.

However, it looks like Pereira is trying to get inside the head of Adesanya, as he has released footage of a sparring video earlier today. The video seems to show the title challenger sparring whilst balancing on a hoverboard. Quite impressive, yes.

Here is the footage:

“Training with a tennis ball is easy! I want to see him train boxing on a hoverboard.” pic.twitter.com/DiOpJuXtse

This video was aimed back at Adesanya after he had released footage of him training earlier in the week. ‘The Last Stylebender’ was seen in training using a tennis ball for some reason, hence why Pereira has hit back with this video.

It is all a bit of mind games and trying to get one over on your opponent of course, but this video of Alex Pereira training whilst on a hoverboard is quite brilliant, admittedly.

Not long to go now until the fight, with UFC fans all around the world ready for what promises to be a monumental main event at MSG on November 12th.

Haven’t claimed the Adesanya vs Pereira betting offer yet? Don’t worry, take a look at the best betting sites and claim the best bookmaker free bets. Be sure to also check out the best offshore betting sites.