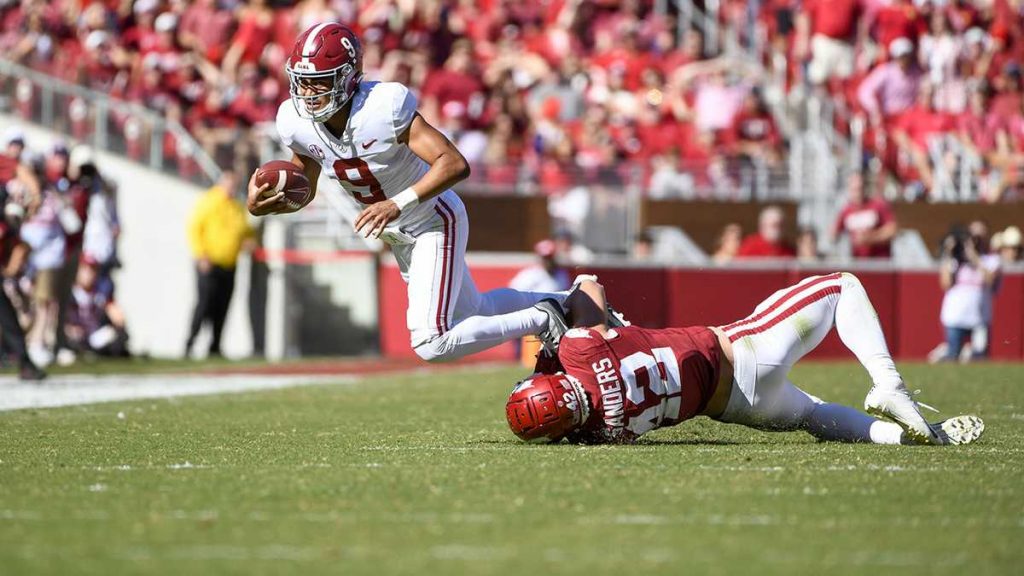 Alabama quarterback Bryce Young left the game against Arkansas early. Young was seen smashing his helmet to the ground in frustration after he suffered what appeared to be a severe shoulder injury. However, Alabama head coach Nick Saban is hopeful Young could start against Tennessee.

When Bryce Young slammed his helmet into the turf against Arkansas, college football fans probably feared the worst. The Heisman Trophy winner’s injury appeared to be serious and our instant thought was it was season-ending.

But that was not the case. Young’s injury was an AC joint sprain in his throwing shoulder and Young was warming up the following week against Texas A&M. However, he wasn’t throwing the ball just yet.

When asked about his quarterback’s condition, Alabama head Nick Saban provided a similar answer to the one he gave press last week.

“Hopefully, we are going to try to get him ready to play this week,” Saban said. “But this is something where nobody can predict how quickly this is going to give him an opportunity to be able to go out and do what he needs to do. We’ll see as the week progresses. I don’t have an update much more than that.”

Saban did also say that Young was wanting to play at the end of the game against Texas A&M which is a promising sign for Alabama fans.

Based on this, sounds like Bryce Young will play next week on the road at Tennessee.

Nick Saban says Young was ready to play late in the game against Texas A&M pic.twitter.com/rXwdSakKb7

“I feel very confident he will play this week. It is a pain management situation and I’m optimistic last week’s situation was more precautionary than anything else.

“I’d be highly surprised if he’s unavailable this week.”

The belief among the people in the know is that he was held out against the Aggies specifically to be ready to go against Tennessee.

If Bryce Young doesn’t go, Jalen Milroe will get another start. Milroe is more of a runner than Young but has managed to guide the team to two wins, albeit only just. Without Young at QB, Tennessee becomes a much more difficult prospect. So Alabama fans around the country will be holding their collective breath prior to kick-off until the starter is announced.