What Wesley Sneijder has achieved in just under a year is incredible. The 26 year old Dutch maestro was deemed surplus to requirements at Real Madrid when Florentino Perez brandished his bulging cheque book to the other big hitters of European football as he began his new Galactico era.

Sneijder who had been a constant professional during his two year stint at The Santiago Bernabeu was left with two choices. Either sit on the bench at Los Blancos? Or seek pastures new? Ever since he made his decision he has clinched a Domestic and European treble and now is eagerly awaiting his first World Cup Final with his country. Can life get any better for the Dutchman?

Leaving Real Madrid would always seem to be a step down due to the enormity of the football club with its rich history that tinkles the spine of any football enthusiast. Sneijder  was linked with many clubs but only Internazionale put in a concrete offer. People were sceptical over the move. Inter are the Italian champions and are an enormous prestigious entity in world football but would Serie A suit Sneijder? And would Sneijder suit Serie A? Absolutely!

The little man who was brought up through the infamous Ajax academy has blossomed this past year into one of the most spectacular footballers in Europe. At 26 years of age he seems to be hiking up to the peak of his career. His swift agile movement in the attacking third of the pitch is art like. His turn of pace and acceleration can bamboozle his opposition whilst his wide range of passing can unlock even the stealthiest of back fours. His attributes are vast but they hadn’t really gained the recognition they deserved until the climax of last summer when he dived into Italian football and was introduced to Jose Mourinho.

The Special One must take a large chunk of credit for Sneijder’s rise to the top. Playing him predominantly behind a front three with two battling Argentineans in the form of Esteban Cambiasso and Javier Zanetti in the middle of the park just behind him has suited Sneijder immensely. He has that freedom up top with the insurance of the two veterans covering a defensive base in front of the back four.

Mourinho utilised his new signing expertly well. As the Portuguese tactician engineered a more defensive philosophy in Europe in the Champions League to stifle more superior opposition, Sneijder did his job along with his nine other outfield companions as they tracked back and played deep. Even with his attacking emphasis restricted somewhat he still flourished and showed what a key player he is for The Nerazzurri.

He has taken to life in Italy with relative ease. His composure on the ball along with his expert vision to spot a pass has gone a long into answering those doubts over his adaption to the Italian league. It suits him down to the ground. At Inter he is accompanied with some other wonderful technically gifted team mates who put their heart and soul into every game as they adorn the blue and black stripes.

Mourinho’s mentality of “us against the world” rubbed off on Sneijder and the rest of the Inter camp as they cemented their legacy into the football archives by becoming the first Italian club in history to achieve the treble. He played a pivotal role in that accomplishment, absolutely no doubt about that.

Whilst Real Madrid bowed out in Europe and came up as runners up in Spain to their Catalonian rivals Barcelona, Sneijder and Inter were sweeping up the honours. The impact he has made is truly remarkable. He left the capital of Spain feeling rejected and unloved due to the mass influx of players arriving to revamp the Madrid setup.

He and his Dutch compatriot Arjen Robben were left to ponder their football future as it no longer lied in La Liga. As Robben jetted off to the Bundesliga with Bayern Munich, Sneijder was making an instant impact at his new home against their bitter rivals AC Milan. This was the very start of a beautiful adventure for both the club and the player as they hammered The Rossoneri 4-0 with the little maestro playing an integral part of that victory. Since then he helped aid his clubs rise to the top of the Domestic and European summit.

It was somewhat poetic justice for Wesley as he realised a boyhood dream on the 22nd May 2010. Internazionale were back in a European Cup final as they aimed to extinguish forty-five years of hurt. The venue being – The Santiago Bernabeu. The former home of Sneijder. How ironic that nine months on from his departure he was stood in the centre of possible footballs most famous green carpet about to achieve what his former club had hoped to at the very start of the campaign.

Sneijder was deemed not good enough to carry the touch with the other Real stars to make their obsession of clinching a tenth European Cup a reality. With so much investment being poured into the club by Florentino Perez to predominantly achieve European success it was one of his former players achieving what he’s craved since 2002.

Serie A, Coppa Italia and The Champions League all added to Sneijder’s honours list in his debut season for Inter. Had that been mentioned to him at the end of August he may never had believed it. Now he may just pinch himself as he and his nation are about to compete in a FIFA World Cup Final. It has been thirty-two years since Holland were last in the final where they were beaten by hosts Argentina. Four years prior they also failed to beat the hosts in the final as Franz Beckenbauer’s West Germany also resisted their total football.

This current Dutch team may not have the flamboyance and guile of their heroes back in the seventies but my word they are an efficient outfit under the stewardship of Bert Van Marwijk. How many times have the Dutch failed to achieve what they rightly deserve? They are the architects of beautiful football.

It’s almost theatre like as they caress the ball gracefully along the hallowed turf. The class of 2010 may not have lit the world alight with elegant football but they have finally realised how to be victorious in a major competition with an efficient approach. We have seen glimpses of Dutch flavour in South Africa with Sneijder at the forefront of their play.

In their three group games they came out victorious as the Internazionale star was named man of the match in two. Without Arjen Robben in the side due to a hamstring injury the burden was more or less heaped on the shoulders of the rest of the team.  He also netted in the round of sixteen against Slovakia as Robben marked his name on the tournament with a beautiful breakaway goal which was assisted by Sneijder with a wonderful ball down the flank, illustrating his variety of passing.

The Dutch were getting stronger and stronger as the tournament proceeded. The ultimate test came in the quarter finals against the favorites Brazil. Although they were outplayed in the first half by samba flair and exuberance, Sneijder revived his country’s hopes with a second half brace. His first goal was somewhat fortuitous as his set piece eluded Julio Cesar in the Brazil goal and sailed into the net. There was nothing fortunate about his second as he headed in the winner from a corner as Brazil imploded. 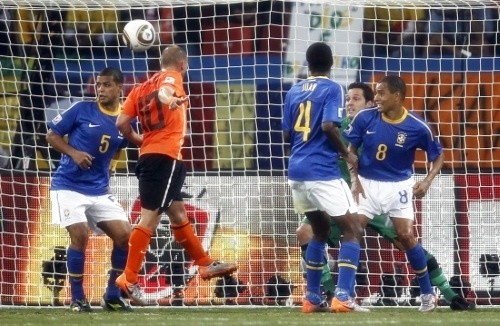 “It just slipped through from my bald head and it was a great feeling.”

An uncharacteristic goal indeed from a man who only stands at 5 foot 7 but was still able to beat the towering Brazilians to the punch and book his teams place into the semi finals against Uruguay. There he scored a vital goal which put The Flying Dutchmen into a 2-1 lead. Yet again a lucky deflection helped ease the ball into his opponents net but his willingness to take a chance paid off. They went onto win 3-2 and book a date with destiny as the Spanish now stand in their way of crushing their aspiration.

The Oranje is littered with players of high technical calibre but no more so than Wesley Sneijder. His impact in the World Cup has been rubber stamped as one of the best as he stands a real chance of landing the Golden Ball come the end of the tournament. He is also joint top goal scorer would you believe with five goals.

That is staggering for a midfield man in a tournament that has been blessed with top quality front men. He and David Villa will battle it out in the final as the Golden Boot is at stake along with the eternal status of World Champions. However there is no doubt either of them would trade all their goals in order for Sepp Blatter to hoist a World Cup winner’s medal over their head.

It has been a stunning year in the life of Wesley Sneijder. He has now firmly established himself as one of the world’s elite footballers and stands a real chance of lifting the FIFA Ballon d’Or at the turn of next year. The victors in the final may very well go a long way in sorting that dispute as a few Spaniards also have their eye on the prize. Nevertheless whatever happens in Soccer City on Sunday, Sneijder has achieved more in just under a year than most do in an entire career. He has set an example for all aspiring youngsters who want to be winners.