The 105 million pounds – that is the amount of money Real Madrid is ready to pay for Gareth Bale in a deal, that was reportedly accepted under a mutual agreement. Even though the deal hasn’t gone trough yet (will it?), the three digit number brought up a lot of discussions – not only did we hear people asking if Bale is worth, there were also rhetorical questions of how far will the clubs go in this spending frenzy.

Methodology: past world records (in millions of pounds) converted into present value of money by the use of deflator. Points plotted in Logger Pro, which generated an equation using quartic model, most appropriate for the observable trend.

Since the Gareth Bale transfer from Tottenham to Real Madrid is just a theoretical record for now, it was omitted when plotting the equation. Interestingly enough, it fits on the dotted line, which represents future estimates, very well. Basically it means that if someone would had made this equation in 2009 (when Cristiano Ronaldo was sold to Real Madrid) this newly discussed sum would be predicted with quite a precision. It most certainly encouraged making further predictions of what we could expect in the future. 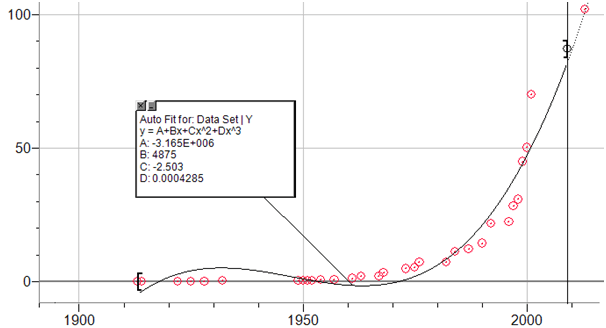 Since the graph changes concavity near the end, I created another version, taking only the end part and implementing a logarithmic model. Once again the Bale 105 million pounds fit in very well, but this time the expected rise was a little more modest, representing a case of transfer fees actually not skyrocketing so sharply.

Who will make this spending…

Since the last few records were set by Real Madrid, and this club is not owned by a rich Arab, which could point to an uncertainty in future income, let’s for sake of this research assume that this club is the most realistic candidate for the mentioned record in 2018. The local rivalry with Barcelona as well as the never changing goal to get the Champions League title supports the fact that the Spaniards could continue to spend big. Still, the questions stands…

…will they have enough money.

In the recent years Real Madrid has had quite a stable income growth – about 9% yearly growth in last 4-5 years, thus it is safe to say one can extrapolate this trend to next five years. Assuming an inflation of 2%, backed by ECB outlook, the present value of Real Madrid revenue in 2018 will be around 770 million euros. So, the estimated 2018 transfer record represents an even lower share (19%) of the yearly income as the currently proposed Bale transfer fee (23%).
Furthermore, the very stable gross margin of around 5% (which is not high, yet keep in mind, that this is after all the big transfers and a superclub actually earning profit is becoming more of a rarity nowadays) shows that Real Madrid has no problems getting their money back, as the expenses – arrival of the superstars – are closely linked to the income sources. Shirt sales, better sponsorship deals, other commercial income (40% share of the players’ image rights is a good example) – you name it.
These facts show that there is no reason to believe that estimated 20% growth of present value of transfer fees in next five years, as calculated by the model, is unrealistic, whether coming from Los Merengues, or anyone else, that will be ready to outdo them.
There are lies, damn lies and statistics, but also temptation to make interesting predictions.