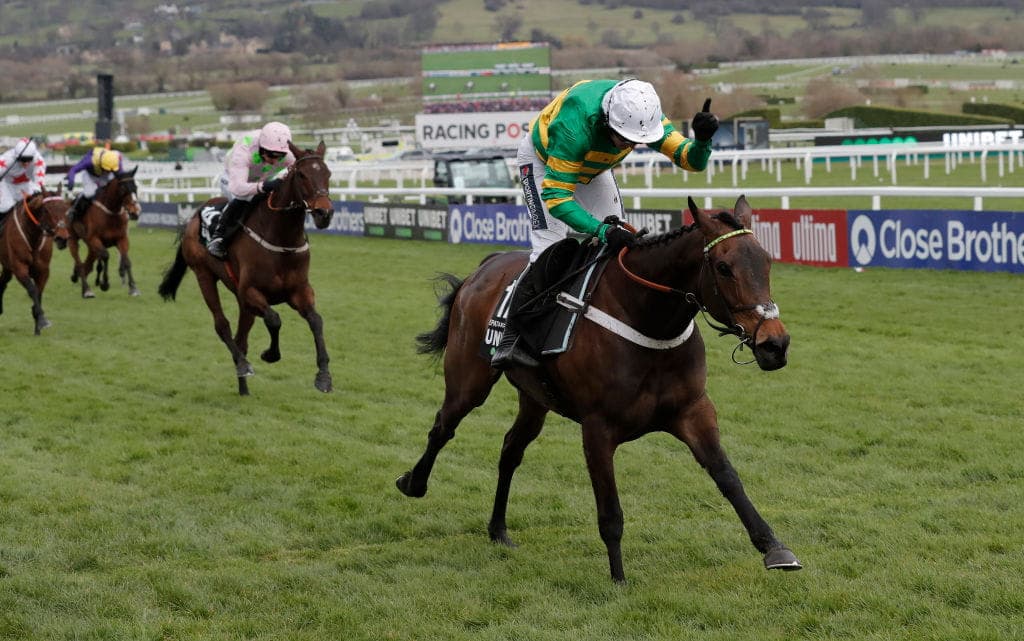 The second of two Grade 1s on the Boxing Day card at Kempton Park is the 2m Christmas Hurdle (2:30). Only six horses are among the initial entries for this festive feature over the smaller obstacles. That doesn’t deter SportsLens experts from taking a view, though, and giving their Christmas Hurdle tips here.

Any stats and trends on this race usually start with leading Irish owner JP McManus. This legendary gambler and racehorse fanatic has farmed the contest in recent years, winning it seven times from 2010. Five of the last seven favourites have won the Christmas Hurdle, so traders on horse racing betting sites don’t often get things wrong.

Race fitness is another important element. All bar one of the last dozen Christmas Hurdle winners had at least one run beforehand. Nicky Henderson has trained the victor a record nine times this century, meanwhile, and that formidable record commands anything saddled from Seven Barrows tons of respect.

It’s not unkind to make the observation that this perhaps isn’t the race it once was. Past Christmas Hurdle winners include equine legends Lanzarote, Birds Nest, Dawn Run, Kribensis, Intersky Falcon, Binocular and Faugheen. Four of the last five successful horses had official ratings of below 159 and it’s the same for all but one entry this year. Let’s see who our tipsters fancy from the bunch…

Why Epatante has the shortest Christmas Hurdle odds

Two years ago, Epatante cruised to victory in this race and went on Champion Hurdle glory. As a mare receiving a 7lb sex allowance from the geldings, Henderson and McManus’ daughter of No Risk At All was a formidable prospect. Things began to unravel for Epatante, however, in the defence of her Christmas Hurdle crown 12 months ago.

She didn’t pick up in the home straight and could only finish second to the ill-fated Silver Streak. Epatante, sent off that day the 1/5 favourite, ran as if something was amiss. A back problem came to light but she hasn’t won a race outright since the 2020 Fighting Fifth at Newcastle.

Fellow mare Honeysuckle and another Irish raider Sharjah were too good for Epatante in both the Champion Hurdle and Punchestown Festival equivalent in the spring. That remains the best form on offer, however, and reads well in relation to this far shallower Grade 1 contest. Both the winner and runner-up have gone in at the highest level since.

Epatante herself has been first past the post in the Fighting Fifth but in a dead-heat with likely re-opposing rival Not So Sleepy. The Newcastle judges couldn’t split the pair, and to be honest it was disappointing that she couldn’t defeat a horse 9lb wrong with her on adjusted ratings.

The only thing that can be said for Epatante is that she conceded race fitness to Not So Sleepy, who ran on the Flat before the Fighting Fifth. It’s clear that the market expects Epatante to come on for the run and win the Christmas Hurdle outright but she also has to if there’s any point in continuing down the 2m route. It’s 4/5 with Betfred that she regains her Kempton crown here.

Suspicion that Not So Sleepy fluked dead heat

Newcastle has a weird history of producing shock results in the Fighting Fifth. From Cornerstone Lad capitalising on the freak injury suffered by Buveur D’Air to Samcro and Apple’s Jade getting turned over, Gosforth Park form can’t always be taken literally. It’s for that reason why trusting the other horse in the dead-heat, Not So Sleepy, may not be wise.

Hughie Morrison’s dual-purpose performer is rising 10 yet had his moment in the snow if not sun in the Fighting Fifth last time out. Not So Sleepy, a son of Beat Hollow, was only fifth in the Champion Hurdle but still home in front of very talented horses. They include last year’s Christmas Hurdle hero Silver Streak, this summer’s Galway Hurdle victor Saldier and Goshen, who could re-oppose.

A dual winner of the Betfair Exchange Trophy at Ascot beforehand, Not So Sleepy also caused carnage in last year’s Fighting Fifth. He unseated his jockey when refusing to jump the first hurdle and proceeded to ruin the rest of the race by running on and off the course in front of the others. It was a chaotic event.

That begs the question which Not So Sleepy will turn up at Kempton? If he’s on-song and up for racing, then top ante post Christmas Hurdle odds of 4/1 look value. Not So Sleepy tops official ratings for the race on a mark of 160. That may flatter him and be more down to Epatante running below her best first time out. As Not So Sleepy has only ever backed-up a race once in his whole career, punters should be careful.

Soaring Glory could bounce back

There was something too bad to be true about the tame effort of Soaring Glory when trailing in last of four in the Gerry Feilden during the Newbury Winter Carnival last time out. His trainer, Jonjo O’Neill has both ridden and saddled horses to victory in the Christmas Hurdle, so stepping markedly back up in grade is an interesting move.

The Gerry Feilden was the slowest run race on Ladbrokes Trophy day, and way outside the standard time. A stronger gallop and less tactical race should suit Soaring Glory, and he may well get that here. The winner, Onemorefortheroad, has since chased home Tritonic in the Betfair Exchange Trophy and that one could turn out again quickly.

Soaring Glory, a six-year-old son of Fame And Glory, held an entry in that but may have been saved for a crack at the Christmas Hurdle instead. He won the Betfair Hurdle at Newbury on his penultimate start last season before a fine forth in the Supreme during the Cheltenham Festival.

This is a fact-finding mission really, to see if Soaring Glory is good enough at a higher level. He won a Listed handicap under a welter burden on reappearance at Ascot, so clearly has ability. It could be worth chancing Soaring Glory at 6/1 with William Hill, especially if the top two in the betting don’t deliver.

Back Soaring Glory with William Hill

Aforementioned Betfair Exchange Trophy winner Tritonic could run again eight days later in the Christmas Hurdle. As the only other course and distance winner besides Epatante in the line-up, Alan King’s four-year-old is also of interest and was clearly a cut-above the opposition at Ascot. Going right-handed seems to suit the McNeill Family owned horse better as well.

Tritonic may not be seen to best effect on a galloping and undulating course like Cheltenham but he could be a flat track bully here at Kempton. He routed his then fellow juveniles in the Grade 2 Adonis here back in February. Tritonic stormed home 10 lengths and upwards clear of the field.

This demands more, something reflected by the Christmas Hurdle betting but King saddled Yanworth to land this five years ago. If he can handle the swift turnaround, then Tritonic could easily hit the frame. Odds of 7/1 with top online bookmakers like Betfred say he will do just that.

There are two other entries. Goshen was a disappointing seventh, albeit under top weight in the Betfair Exchange Trophy, last time out. There are too many questions about Gary Moore’s horse for him to be of interest here. Welsh Champion Hurdle scorer Glory And Fortune completes the line-up but punters can get 33/1 about his chances.

Bet on Tritonic with Betfred