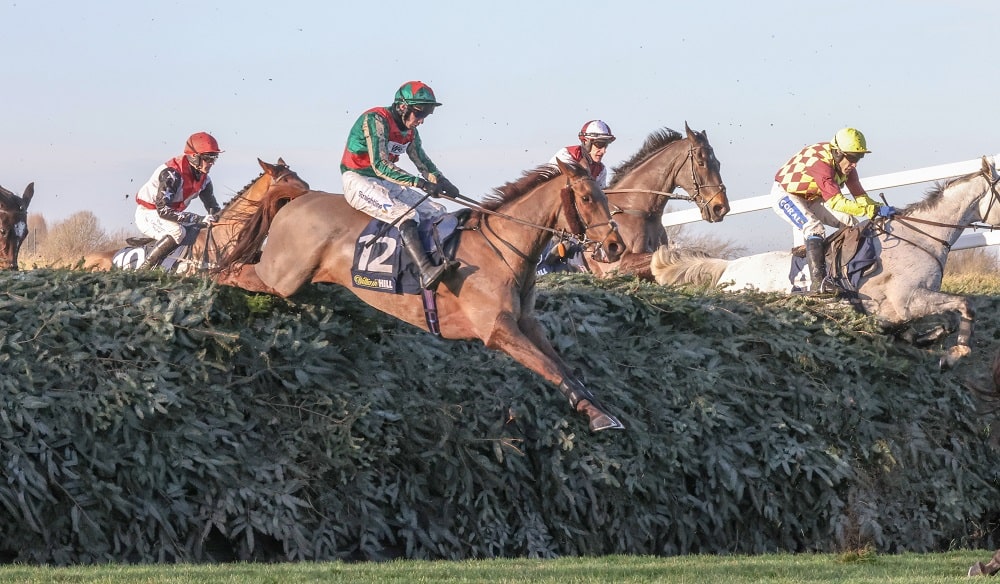 Over the Grand National fences at Aintree on Saturday, 4 December is the 3m 2f Grade 3 Becher Chase (2:40). This is the last time these unique obstacles are in use before the world’s most famous steeplechase in April. SportsLens experts give their 2021 Becher Chase tips for an informative race.

All Becher Chase trends point to the importance of course experience. Seven of the last eight winners had faced the Grand National fences before. In fact, three of the seven most recent victors ran fourth in the big one itself. Race fitness looks important with six of the last seven Becher Chase winners coming to Merseyside off a run.

It usually takes a mature horse to win this race. Seven of the last eight winners were eight-year-olds and up. Official ratings throws up a profile of horses in the mid-to-high 130s or low 140s. However, any of this year’s Becher Chase runners on a mark of less than 137 run from out of the handicap. That makes their task much harder.

Looking beyond the market leaders on horse racing betting sites could also help. This is because five of the last eight Becher Chase winners had a starting price (SP) of 10/1 or bigger. Which horse appeal to our experts this year, though? Let’s take a look at the tipsters’ Becher Chase tips for 2021:

Welsh trainer Peter Bowen saw Mac Tottie start his journey off towards the Grand National Festival with a 20/1 victory in the Grand Sefton last month. That race used to take place on the same card as this one but Aintree moved it forward in the calendar to November. Mac Tottie, an eight-year-old son of Midnight Legend, prevailed by a length over Senior Citizen in that 2m 5f handicap chase.

It wasn’t a flawless round of jumping but the Foinavon fence catches many horses out. This is because it is smaller than many others on the Grand National course. Mac Tottie now has a 7lb hike in the handicap but remains unexposed as a stayer. His revised 142 rating gives him a nice racing weight of 10st 6lb here.

If connections want to realise their Grand National ambitions, then Mac Tottie must prove his stamina here. The bookies are well aware of that too. That is why Mac Tottie is well-found in the market at 13/2 with William Hill, who pay six places on the Becher Chase. On a race like this where anything could happen, only each way betting is wise.

Likeable grey mare Snow Leopardess has been a revelation for Charlie Longsdon and the Fox-Pitt family since returning to training after having a foal. It would be some story if this nine-year-old daughter of Martaline could win one over the big fences but she also has the form to back-up her hopes.

After getting up to land a Haydock handicap on Betfair Chase day last year, Snow Leopardess ran a blinder when runner-up to Canelo in this grade at Wetherby. She has since confirmed the Rowland Meyrick form with the third home, Windsor Avenue, at Bangor on reappearance. Snow Leopardess also beat Grand National sixth Blaklion last time out, and he has since landed a competitive veterans’ handicap at Haydock.

As Snow Leopardess was also fourth in the National Hunt Chase at Cheltenham, this trip holds no fears for her. Remastered, behind her in fifth that day, looked poised to mount a very serious challenge in the home straight at Newbury during the Ladbrokes Trophy last Saturday only to come to grief. Snow Leopardess could be well worth a wager off 140 and 10st 4lb with Bet365 going 7/1 about her chances.

Back Snow Leopardess with Bet365

Perthshire trainer Lucinda Russell has some top staying chasers in her stable. Mighty Thunder won the Scottish Grand National at Ayr in April, so the English equivalent is on his agenda for this term. The eight-year-old son of Malinas needs experience of the Aintree fences, so tries the Becher Chase for size. The trip is probably on the sharp side for him, however.

Nonetheless, Mighty Thunder ran a number of mighty races in extreme distance events earlier this year. After landing the Edinburgh National at Kelso, he chased home Time To Get Up in the Midlands National over even further at Uttoxeter. Mighty Thunder then defied a 5lb rise at Ayr.

Stamina should not be an issue for a horse win form figures of 121 over trips of 4m+ here. The Grand National fences are a great leveller, but it’s not a stretch to imagine Mighty Thunder staying on when others cry enough. He should strip fitter for his fourth in the Grade 2 Charlie Hall Chase at Wetherby which was too sharp. Mighty Thunder is a top-price 8/1 with William Hill here.

Back Mighty Thunder with William Hill

Leading Irish owner JP McManus loves runners over these fences. Minella Times and Don’t Push It have both won the big one at Aintree, but Kimberlite Candy has twice finished runner-up in the Becher Chase. Trained by Tom Lacey, this nine-year-old son of Flemensfirth bumped into Walk In The Mill two years ago and then a revitalised Vieux Lion Rouge last term.

Kimberlite Candy stayed on into second on both occasions, racing off 153 12 months ago. He is now 3lb below that rating and meets Vieux Lion Rouge off 8lb better terms. There is 24 lengths between the pair on last year’s meeting, so it at least gives the younger horse a chance of reversing the bare form. The market certainly thinks Kimberlite Candy can.

Coming into the race fresh wasn’t a problem then or the season before, so there is no reason to think he can’t hit the frame again. Whether Kimberlite Candy, who won the 2020 Classic Chase at Warwick by 10 lengths, can go one better remains to be seen. He rates another solid each way bet with Betfred, who also pay six places, going 10/1.

Back Kimberlite Candy with Betfred

Checkitout could be worth chancing

Many will fancy their chances in this contest, but nobody has trained more Becher Chase winners than Nigel Twiston-Davies. Checkitout has a 3lb claimer aboard, almost negating the fact that he is officially out of the handicap. This Salutino gelding has a stamina laden pedigree and stayed on into second in this grade at Ascot last time out.

Checkitout also jumped left on occasions, a negative there but no problem here at Aintree. The handicapper left him on the same rating of 132. Taking conditional jockey Jordan Nailor’s claim into account, Checkitout only runs from 1lb out of the weights in this. He also gets an 11lb swing with Mac Tottie from a previous encounter.

Twiston-Davies has been in good form with his runners this autumn too. The only question marks are whether this comes too soon in the career of Checkitout. Seven-year-olds do not have a good record in the longer distance races over the Grand National fences. His jumping will also be put to the test too. Checkitout is 12/1 with BoyleSports off a featherweight here.

Bet on Checkitout with BoyleSports

Dual race winner Vieux Lion Rouge has always targeted this race since he first won it aged seven. His form figures in the contest read 17291. Trained by David Pipe, this beloved 12-year-old veteran did blot his copybook of never falling over the Grand National fences in the big one this spring. Given his otherwise magnificent record of getting round the course, he can be forgiven one blemish.

Vieux Lion Rouge is 5lb higher than 12 months ago and couldn’t win this off his current rating of 145 in 2019. It would be foolish, however, to dismiss a horse on age alone. Other recent Becher Chase winners include a fellow 12-year-old and two teenagers! Pipe will be looking for another fine show from his Sabiango gelding here.

With age no barrier to success, it is just a case of whether the mark Vieux Lion Rouge is workable. He has 10st 9lb on his back this time. Tom Scudamore takes the ride this year as well. Vieux Lion Rouge is another each way player with BoyleSports, yet another bookie paying six places, at 14/1.

Back Vieux Lion Rouge with BoyleSports

There are four Irish raiders among the Becher Chase runners this year. Chris’s Dream has the burden of top weight, while Noel Meade sends two over from the Emerald Isle in Snow Falcon and Tout Est Permis. Gordon Elliott veteran Ravenhill should appreciate a drop in grade after being throw in to some very deep waters of later.

This 11-year-old Winged Love gelding won the 2020 National Hunt Chase at the Cheltenham Festival. Ravenhill meets re-opposing runner-up Lord Du Mesnil off 3lb better terms too. Since that Grade 2 triumph, it has been very difficult to place him. However, there are bits and pieces of form which suggest now in less elite company that Ravenhill could have a squeak.

He was only beaten 12 lengths by The Storyteller in last season’s Down Royal Champion Chase. Ravenhill then ran third to subsequent Cheltenham Gold Cup hero Minella Indo in a Navan Grade 2. Although no match for the winner and runner-up, Brahma Bull, who has since won the Pat Taaffe at Punchestown, then finished second in the Kerry National and third in the Ladbrokes Trophy, the form reads very well.

Ravenhill can only strip fitter for trailing in last of five in the Down Royal Champion Chase on reappearance. If only his treatment from the British handicapper was better. The assessor treats all raiders from the Emerald Isle with suspicion, but Ravenhill probably shouldn’t be 20/1 with Bet365, especially when you consider the fine record of older horses in this contest.

Bet on Ravenhill with Bet365

Rather than give our usual shortlist, as with any race involving the Grand National fences, there are a series of each way bets to consider: