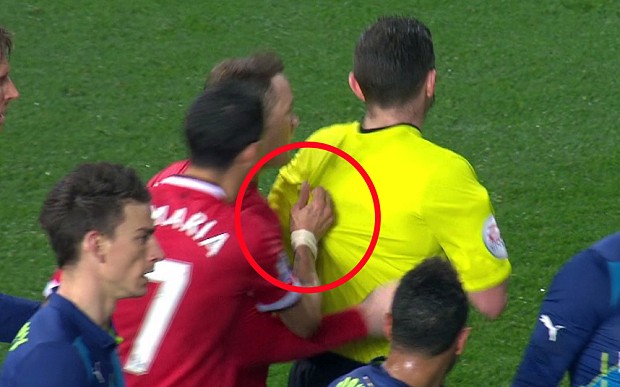 Manchester United winger Angel Di Maria has been given just a one-match suspension for grabbing referee Michael Oliver from behind during Arsenal’s 2-1 victory over United in the FA Cup quarterfinal at Old Trafford on Monday.

The Argentine was dismissed in the 77th minute after picking two yellow cards in the space of a minute.

He was first cautioned for diving but the British record signing then grabbed the back of referee’s shirt for which he was given another yellow, and subsequently red card.

Earlier this season, Norwich City defender Martin Olsson was banned for three games for the same offence. He given an additional three match ban by the FA in August and fined £3,000.

In case of Di Maria, as reported by Mark Ogden of The Telegraph, the FA didn’t review the incident in accordance with the regulations of not ‘re-refereeing’ decisions taken by match officials.

That is the player cannot be shown straight red unless the referee finds the force of contact as a violent one. In this case it is not.

Di Maria will not face any further actions but will miss Sunday’s Premier League tie with Tottenham Hotspur.