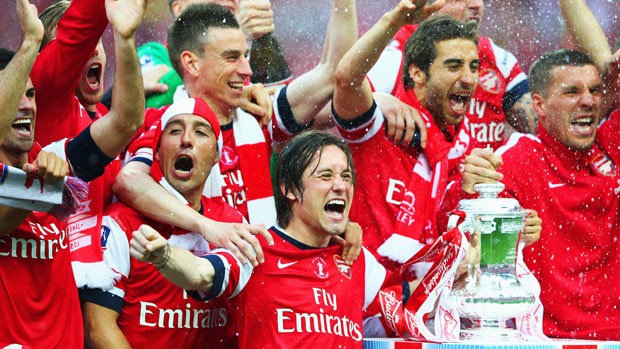 Arsenal legend Ray Parlour says his former side were “superb” as they comfortably dispatched Championship high-fliers Middlesbrough yesterday at the Emirates thanks to two goals from Olivier Giroud – that sees the North Londoners through to the quarter-finals of the FA Cup.

The Gunners were expecting a tough clash from in-form ‘Boro, who had seen off Premier League holders Manchester City in the last round of the competition.

But Giroud’s double strike in the space of three minutes in the first half killed the conquest and ensured there would be no upset from Middlesbrough this time round.

The Frenchman slotted his first in the 27th minute with a close range finish following Kieran Gibbs’ cross. He was then on hand to poach a second after good work from Santi Cazorla who provided the delivery to the near post.

Arsenal continued to dominate the game and should have increased their tally but such a strong display has nevertheless laid down a marker they are serious about retaining the competition they won last season after beating Hull in the final – ending nine barren years without a trophy.

And former Gunners midfielder Parlour says it was important for his old side to win, especially with the FA Cup again representing their best chance of silverware this season.

“Arsene Wenger respected Middlesbrough and got his players to start on the front foot and dictate from that midfield area,” he told Sky Sports.

“Maybe you could say that ‘Boro were a little bit deep at times which meant there was too much space for the likes of [Mesut] Ozil and [Alexis] Sanchez. You can’t let those sort of players have lots of the ball because sooner rather than later they are going to find the right ball like they did with Cazorla and Gibbs for Giroud.

“I think Middlesbrough tried to outplay Arsenal a little bit but I think you have to be physical against them, especially when you are a Championship side going to the Emirates. You have to get into their faces a little bit. They probably showed Arsenal too much respect and we know they are a great side when they’re on their game.”

He added: “Arsenal were superb on the day, though whether you can say Middlesbrough didn’t turn up on the day is a different matter. Arsenal did what they had to do and got through to the next round which is very important.”