What with TV revenue swelling player salaries, takeovers galore and spiraling ticket prices, Premiership management has assumed the role of poisoned chalice in this day and age. The stakes are higher than ever: managers of the clubs coming under new control feel pressure to impress potential new owners or risk being jettisoned in preference for a new man (see endless media speculation, aka more pressure, regarding Steve Bruce’s future at Birmingham in recent weeks).

Then there is the delicate balancing act in getting results and pleasing the fans, which Stuart Pearce could no doubt have testified to last season as Man City’s season ticket renewals for 2007-8 threatened to fall sharply, while ‘Little Sam’ struggled to live up to Bolton fans’ expectations in the months proceeding the ‘Big Sam’ era. Even Chelsea’s ‘Special One’ was believed to be grappling for power over new signings and pacifying dissatisfaction from Stamford Bridge’s powers that be regarding his style of football.

The pressure is felt by those working in every supposed plateau of the league, the top four, the central tier and the pressure to survive in the lower reaches to ensure the massive TV revenue in comparison to the Championship. Bruce had to dig deep in his reserves by ensuring Birmingham’s return to the Promised Land after their relegation, while Aidy Boothroyd emulates this model at Vicarage Road. It gives some credibility to clubs sticking by their managers and is refreshing to see.

It is also invigorating to see three British managers flourishing in today’s Premiership environment. Harry Redknapp, David Moyes and Mark Hughes seem, looking from a distance, to be guiding their respective clubs in the right direction. All three have had to work hard just to steady their respective ships at Portsmouth, Everton and Blackburn before building on the foundations, but do these three have any special factors that can be scrutinised as a recipe for success in the modern day Premiership?

Harry Redknapp immediately worked his magic at Fratton Park, bringing in players of the calibre of Paul Merson and Tim Sherwood and hauling the Southern club from possible relegation to the third tier to promotion in some style within a year, not to mention keeping Pompey up at the first time of asking. However, not many on the South coast would need reminding of Redknapp’s ill fated move after leaving the club for Southampton late in 2004; the Saints were demoted six months on. 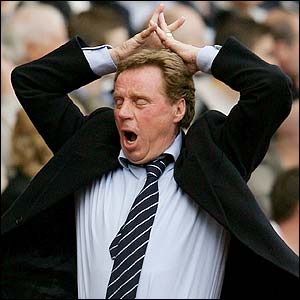 Yet while Pompey fans were doubtless reveling in this fact, they didn’t fare too well under the French coach Alain Perrin, who was sacked after a woeful start to the 2005-6 Season, and amazingly, Milan Mandaric plumped for Redknapp as Perrin’s successor, displaying a fairytale choice of judgment seldom seen in football. Portsmouth miraculously escaped relegation and subsequently enjoyed a good 2006-7 season. Indeed, they are going well again, at the time of writing they are perched fourth in the Premiership and look set for another outstanding season. How does Harry do it?

He clearly possesses outstanding shrewdness in many aspects of the game, the transfer market undoubtedly being his forte. Despite losing his sense of smell in 1990 he knows how to sniff out a bargain, and how to market the ambitious club to the player; enticing consistent, proven performers such as Lauren, Sylvain Distin, Sol Campbell, Kanu and David James into joining Portsmouth, in much the same way the talismanic Merson arrived.

The French businessman who assumed control of the club in early 2006 must also have noted Redknapp’s acumen, having picked up the five players, with almost 200 international caps between them, for around £1.7m. Added to this, players such as Benjani and Sulley Muntari have been signed, utilising his network of European contacts and scouting, for an eclectic mix of pace, youth and experience. There have been flops during his career, as with most managers, who could forget Marco Boogers?

That said, Redknapp also gambled on putting into the West Ham first team many English youngsters who would go onto blossom in the late 1990s, consider the following; Rio Ferdinand, Frank Lampard, Joe Cole, Jermain Defoe and Michael Carrick. Credit must naturally go to the West Ham academy on these gems, but Redknapp still had to blend them in and get results.

Harry has, nonetheless, courted controversy during his career; leaving Bournemouth after growing apathetic with a lack of boardroom support, West Ham after Chairman Terence Brown learned of Redknapp’s negative comments to a club fanzine, Portsmouth initially after becoming unhappy with interference from the then owner Milan Mandaric and finally Southampton reputedly unhappy with the introduction of Clive Woodward, former England rugby coach, onto the coaching staff. On the theme of boardroom relations, he has just signed a new four-year contract which will no doubt please the club’s staunch, passionate army of fans.

David Moyes has displayed many similar attributes for success, after arriving at Everton back in 2002. The Glaswegian instantly lifted the Toffees away from relegation danger in his first few months at the helm, helped by the inspired loan signing of Brian McBride. Since the 2001-2 campaign, the club has had finishes of: 7th, 17th, 4th, 11th and 6th respectively. The outstanding top four finish arrived by way of winning 13 matches by a single goal, losing Thomas Gravesen to Real Madrid and recovering from heavy defeats at the hands of Arsenal. He has moulded a persevering unit in the top half years, Goodison Park hasn’t been one of the easier grounds to visit while Everton picked up points on the road and this season appears no different. 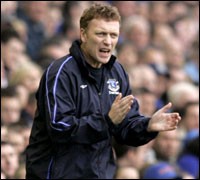 In addition, he hasn’t been afraid to take the odd gamble along the way, blooding in a player who needs no introduction, Wayne Rooney and other budding youngsters such as Leon Osman and Victor Anichebe. Yet probably a stronger indication of the Moyes’s ability as a manager has come not in guiding the team to three European stints, but in the litmus test of adversity. The season in which the Merseyside outfit broke the monopoly of the big four was subsequent to one in which they survived relegation by the skin of their teeth, even with somebody as talented as Rooney in the ranks.

Yet arguably the biggest test of the Moyes era came during the calamitous onset to the 2005-6 term, as the Blues lost 7 of their first 9 Premiership games, crashed out of firstly the UEFA Champions League to Villareal and then the UEFA Cup to Dinamo Bucharest. He displayed his resilience under pressure and stuck with his troops to secure a 1-1 draw at home to the mighty Chelsea, which effectively stopped the rot and instilled some badly needed self belief. With every loss the media spotlight on Moyes became more intense and magnified, but he went on to steer Everton to a mid table finish, excellent considering the circumstances.

Moyes too has shown an eye for a bargain, acquiring players such as the inspirational, free scoring antipodean midfielder, Tim Cahill, along with the creative artist, Mikel Arteta, for a combined fee of around £3.5m. Joleon Lescott looks to be another excellent find, while Andy Johnson cost £8.6m but looks to be worth every penny for the Toffees. Again, there has been the odd failure: Moyes may well be regretting his faith in Andy Van Der Meyde’s potential. In terms of potential problems with the board, the fact that the Scot emerged intact following the woeful start in 2005 surely underlines that they have faith in him. Indeed, the person the Scot has been most aggrieved with would probably be Wayne Rooney, who chose to depart for Manchester United in 2004. Moyes has since initiated a libel action against Rooney for his account of how he came to depart Merseyside.

Finally, but arguably most impressively, Mark Hughes entered a rudderless club in disarray when Graeme Souness departed Ewood Park for Newcastle United early in the 2004-5 campaign. Indeed, Blackburn lay slumped without a win in 4 games when Hughes was appointed on September 15th. Instantly, he guided the Lancashire outfit to a win over Portsmouth. Yet he still had a ship to steady, but hitherto has masterminded and revived the club’s fortunes in much the same way he did with the Welsh international team in the years prior to arriving at Blackburn. 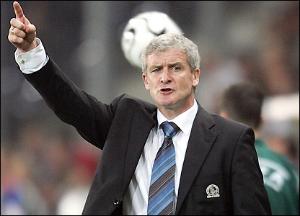 Initially, the emphasis was on stability. 4-0 capitulations at the hands of Middlesbrough and Chelsea indicated underlying problems, and Hughes had to wait over 2 months for his next win. 5 points from 24 followed but the form most notably of Paul Dickov helped Rovers to 4 consecutive draws before they won 2-0 at Craven Cottage in late November, and slowly but surely, the Blue and Whites turned a corner. They lost 3 of their final 12 matches of the season and safety was ensured.

The club’s latin motto translates as ‘by skill and hard work‘, attributes one would associate with Hughes in his playing days, and he began to imprint them on his team. The following season Blackburn finished in 6th place and European football was ensured. The signing of Craig Bellamy was a masterstroke: a player notorious within the media for having a lot of baggage, the striker hit 17 goals under his old international manager with few problems, proving that Hughes, who learnt his trade under Sir Alex Ferguson as a player, showed he had picked up a thing or two with regards to discipline. Post Christmas 2005, they won 13 of their last 20 games and picked up the home scalps of Chelsea, Arsenal and Manchester United.

While the season after Blackburn had to rely on the Intertoto Cup as a European route following a respectable 10th placed finish, 1 defeat in the first 11 Premiership games in 2007-8 shows that Hughes is doing something right again.

He has turned Rovers around completely, moulding old fashioned grit with a plethora of attacking talent in the space of 3 years. In terms of signings, Hughes has frequently dipped into the market and found gems oozing with class, and nearly all have been exemplary finds for any aspiring manager at bargain prices; Benni McCarthy, brought in to replace Bellamy, hit 24 goals in all competitions last season while Christopher Samba has proved an absolute steal at £400,000 to complement Ryan Nelsen in defence, picked up on a free transfer.

There have been others; Hughes virtually acquired a new player when he reignited Morten Gamst Pedersen’s confidence on the left flank, while David Bentley, signed for around £3.5m from Arsenal, complements the Norwegian beautifully. The two wingers are a joy to watch, both capable of scoring, consistently landing the ball in the danger zone, a frequently devastating threat from set plays and generally wreaking havoc in and around opposing defences. The additions of Stephen Warnock and Roque Santa Cruz also look like excellent forays into the market.

It has already been noted that Harry Redknapp and David Moyes were astute enough to blood in young talent at their respective clubs, and Hughes is no exception to the rule. The way in which Matt Derbyshire burst onto the scene in the 2006-7 season has further reinforced the manager’s canny judgment. His relationship and popularity with the board and fans are first rate, and while he has been linked with a host of once vacant jobs, such as Tottenham recently and Manchester City through the Summer, his loyalty has been commendable. Surely, however, it can only be a matter of time before Hughes is destined for bigger things.

With all of the foreign managers we have seen in recent times it was suggested British management talent was a dying breed, yet these three Premiership bosses have proved this to be false.