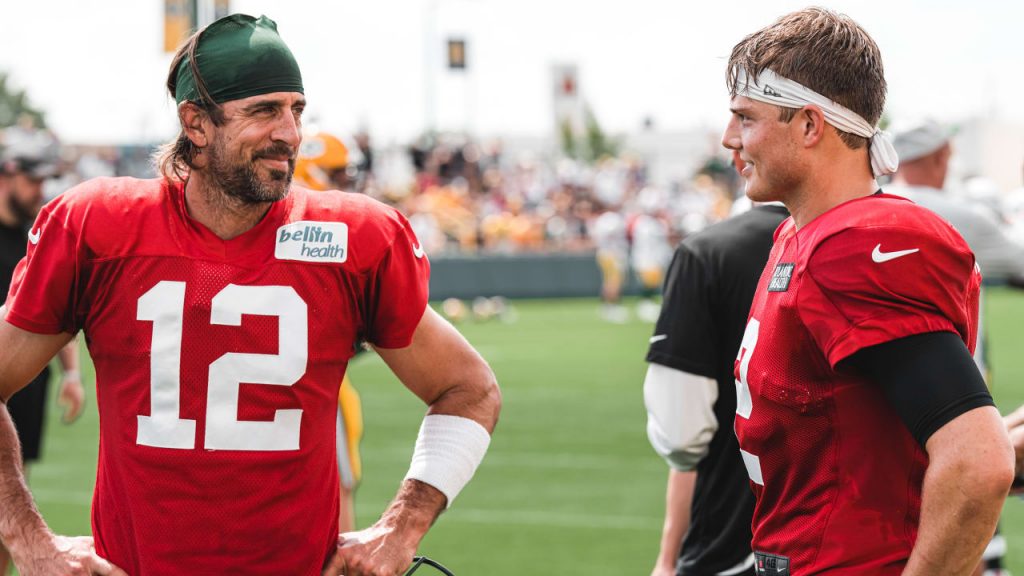 The Jets take on the Packers this Sunday, and Jets QB Zach Wilson has been singing the praises of his opposing QB this week ahead of match-up against Aaron Rodgers and the Packers.

Wilson spoke to the media this week about trying to replicate Aaron Rodgers’ throw as he grew up, with the opposition QB evidently having a big impact on Wilson’s career.

“I’ve been watching him since I was a little kid, trying to replicate the way he throws, the way he plays the game.

“We didn’t have an NFL team in Utah. I wouldn’t say I was a Packers fan. I was just an Aaron Rodgers fan. I grew up watching him. I always liked watching their games because of him and kind of where he was at.

Jets' Zach Wilson, an "Aaron Rodgers fan" growing up, looking forward to finally facing Packers QB: "He was a quarterback I tried to replicate and steal things from"https://t.co/l3HRazDH3k pic.twitter.com/4l62K3GrHU

“He was a quarterback I tried to replicate and steal things from.”

Since Wilson returned from injury two weeks ago, the Jets have recorded impressive back to back victories against both the Steelers and the Dolphins to move to 3-2 this campaign.

Wilson will have to make sure he isn’t too star struck come Sunday when he lines up opposite a childhood hero in Rogers, and with both sides coming into the game with a 3-2 record, a tightly contested affair can be expected between the teams.