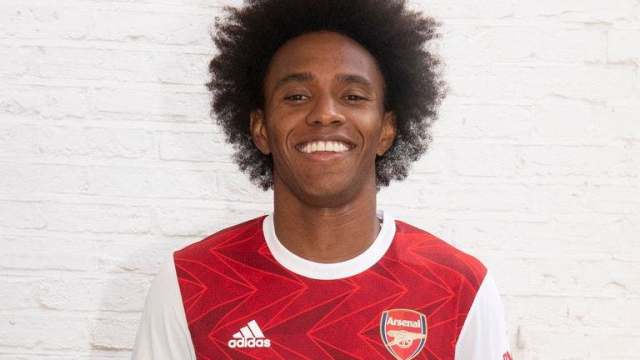 Arsenal’s latest signing, Willian, has set his sights on Champions League glory with Arsenal within three years and he has also marked Pierre-Emerick Aubameyang as the key player to help reach this target. Willian signed for Arsenal on a free transfer and the three-year contract offered by Arsenal is believed to have been one of the key reasons behind his departure from Stamford Bridge.

He comes into the Arsenal squad, which has just picked up the FA Cup title by beating Chelsea, as a player with a tremendous amount of experience and quality. Yet, he has labelled Aubameyang as the important name at Arsenal even as rumours continue to surround his future. Speaking to the Sun, Willian said:

“I joined Arsenal because we can challenge for titles but Pierre will be a big part of the plan. He has to stay — it is very important to me.

“This is a guy who gets 25-30 goals a season and we have to keep a player like that.

“He’s one of the best players in our team and somebody I want to be making chances for.”

Pierre-Emerick Aubameyang has been one of the impressive goalscorers in the Premier League since his switch from Borussia Dortmund in January 2018. The Gabon forward has 54 goals in just 85 league games for the Gunners – a remarkable 44 of them coming in the last two seasons.

Aubameyang came up with both goals that led to Arsenal’s FA Cup success. Yet, his future continues to be highly speculated since he has less than a year left on his contract. At 31 years of age, Aubameyang might be on the lookout for a new challenge – especially if Arsenal failed to challenge for the top four in the 2020-21 season.