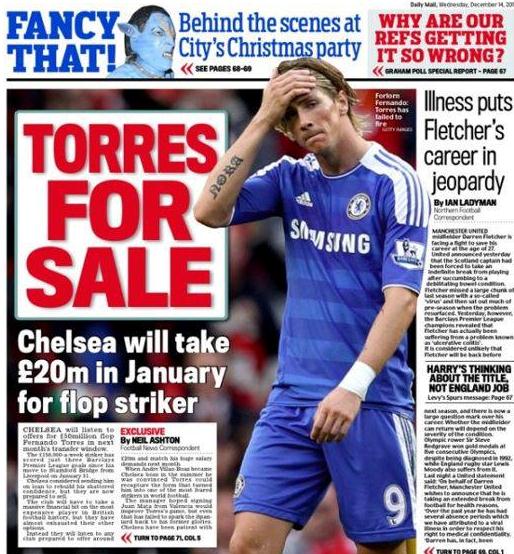 Fernando Torres, once renowned as one of the most feared strikers in world football now finds himself in a disastrous situation. Almost one year since his record breaking £50 million move to Chelsea, Torres has scored mere 5 goals i.e. cost £10 million per goal. The blues have been patient but not anymore as the reports suggest the Londoners are ready to sell him for £20 million. Where will the Spaniard go from here?

Surely Manchester City can afford Torres’s wages but they already have three top quality strikers in Aguero, Balotelli and Dzeko all in form so why sign a flop one.  Adding to that the Spaniard wants to play and at City he will only be able to make the bench warmer than he has been doing for Chelsea.

Sir Alex already has one problem sitting in the form of Berbatov, adding Torres to that, very unlikely. Besides United are not looking to spend much this winter, in case they do then by all means the priority should be a central midfield player. From Torres’s view point, the Liverpool connections might stop him from joining the Devils. Betrayed once for joining Chelsea and turned miserable, the second time he might just be cursed for life by the Liverpool fans.

Harry Redknapp likes to sign players that are unhappy or unwanted at their clubs. Van Der Vaart, Adebayor, Robbie Keane, Jermaine Defoe etc. Torres well unwanted and unhappy, still he is beyond Tottenham’s pay bracket. They just won’t pay over the odds.

The scenario is quite similar with Tottenham’s closest rival Arsenal. Gunners did not bother listening Samir Nasri’s cry of increasing his salary equal to Fabregas’s £110,000 a week, never mind talking about £150,000 for Torres. Let’s say Torres will agree to take a pay cut but to what extent? He earned £110,000 at Liverpool, Arsenal surely not interested.

The fans are divided on this subject. Ever heard of a saying “Form is temporary, Class is permanent” maybe that’s not applicable on Chelsea flops? Some say Liverpool is the only club to get his confident back and start firing goals that the Reds have been missing largely. Others have the word “traitor” engraved in their minds forever when they hear his name. Kenny Dalglish has done a fantastic job of changing the dressing room environment which has been negative for quite some time. Again Torres return might badly influence that.

Being loyal to Atletico, Torres hates Real Madrid. Never mind, they don’t want him. Barcelona have the best Spanish striker in their ranks, signing currently the worst one not in their plans. All others cannot afford his salary except Malaga, but then did he not want to play for a “big club” or for now he just wants to play.

Torres once claimed he’d like to play for Milan but the Rossoneri do not buy players lately, they only want them on loan. Never heard any flying rumors coming from Russia, Anzhi? Lastly PSG, if they can look to sign 36 years old Beckham for not so footballing purpose then why not Torres as he is Spain’s most marketable player.

David Villa, Fernando Llorente and Roberto Soldado are all there and realistically Torres as a bench warmer for blues will not guarantee his place in the Spanish squad for Euro 2012. It is not just that Chelsea have to sell him for their good, but Torres must leave for his.