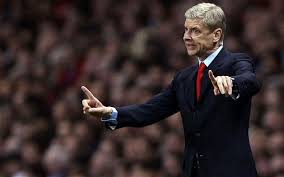 Arsenal manager Arsène Wenger says the desire and resilience shown from his players is what earned them a point at Goodison Park today.

The Gunners had trailed Everton 2-0 going into the final 10 minutes before goals from Aaron Ramsey and Olivier Giroud late on rescued his side a point which had looked unlikely ever since going behind in the 19th minute.

Speaking to Sky Sports after the game, Wenger said:

“We have a great response with complete desire to come back and the spirit was fantastic.

“In the end we got back to 2-2 and we got a strong point but a deserved one if you look at the chances we had, especially in the second half. We came back very late but our spirit got us a point.

“It shows the belief and the resilience is there. The second goal was offside but we took it on the chin and came back.”

Right-back Séamus Coleman had headed Everton into the league following a combination of poor defending from Per Mertesacker and Mesut Özil.

Mertesacker was playing alongside summer signing Calum Chambers for the first time. The 19-year old Englishman himself looked shaky at the back today.

The German duo were making their first appearances of the season for Arsenal having missed pre-season and the start of the season after they and Lukas Podolski were given an extended break following their success at the World Cup with Germany last month.

Everton doubled their lead on the stroke of half-time in controversial fashion. Firstly, it looked as though Arsenal may have had a free kick in the build up when Per Mertesacker was knocked over by Romelu Lukaku.

Steven Naismith who scored the goal was in an offside position when the ball was played through which went unnoticed by the referee’s assistant.

The introduction of Olivier Giroud, Santi Cazorla and Joel Campbell paid dividends to the manager in the second half. Arsenal got better as the game went on and in the 83rd minute it was Cazorla’s ball across the six-yard box that Aaron Ramsey turned home.

In the final minute, Olivier Giroud fought off the attention of Sylvain Distin to head home a 90th minute equaliser from close range.

Arsenal host Beşiktaş on Wednesday in the second leg of their UEFA Champions League playoff round tie following a 0-0 draw in Turkey this past week.