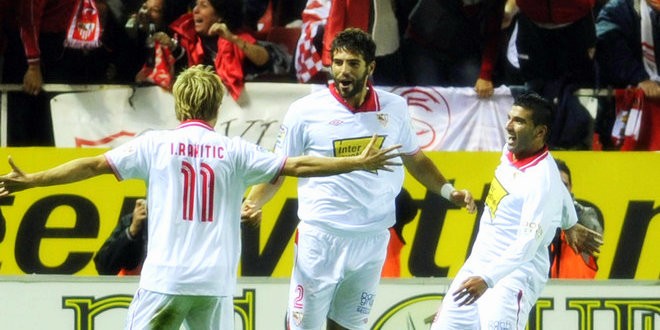 When Jose Antonio Reyes scored the fastest goal in the history of the Seville derby last weekend, snatching that record from opposing manager Pepe Mel in the process, it seemed too good to be true.

When he added another goal and an assist before half time Sevilla fans wondered if they’d died and gone to heaven.

By the time of the final whistle, when a final score of 5-1 was confirmed, ending the home side’s disappointing win-less run against their great rivals, it must have felt like football just couldn’t get any better.

Sadly, it was too good to be true, and things won’t get any better. Sevilla will return to mediocrity, and Reyes will revert to being a disappointment, starting this weekend when he returns to Atletico Madrid with the world waiting to see what he does next. It’s the cruel way football is.

Some basic, unbreachable laws of football are sacrosanct. Reyes’ goals might have raised hopes among the Sevillistas of a wonderful, touching resurrection, but it isn’t going to happen. Football doesn’t work that way.

Jose Antonio Reyes was the golden boy of Sevilla in his youth: a lifelong fan of the club who made the transition to the pitch and immediately established himself as one of Europe’s most exciting young talents with his searing pace and dazzling footwork.

And what did he spend his money on once he hit the big time? A mosaic of the Sevilla badge in the bottom of his swimming pool. Even when he was embroiled in  moments of controversy, they only served to enhance his cult hero status: a brilliant goal led to team mate Francisco Gallardo embarking on a highly unorthodox celebration, going down on his knees and then going down on Reyes!

The Spanish media erupted, but the bemused Reyes merely had another crinkle added to his public persona.

In terms of his game, things were going swimmingly. With a youthful Dani Alves in support and Julio Baptista feeding off him, Reyes was at the heart of a template which would serve Sevilla well in their decade of glory, a side with width and pace, devastating on the break.

Of course, it couldn’t last. Jose Antonio Reyes was destined for better things. The big clubs of Europe were lurking, and they were not to be denied. Arsenal had been long term suitors, and seemed the ideal location for a boy with a small town mentality with their reputation for nurturing young talent and playing constructive passing football in the hurly-burly of the Premier League. The deal went through.

It didn’t work out. Reyes actually didn’t play too badly, but the perception of him as an unhappy export was accurate. He wasn’t happy, but the tie had been cut. He was now operating in a higher sphere than Sevilla’s, trapped in the spiral of an itinerant existence, schlepping around Europe, never finding his form, never finding happiness.

His return to Sevilla last season, his currency reduced, was greeted with delight. But that glee ignored a key tenet of football: you should never go back. He has failed to catch fire at all at the Sanchez Pizjuan, surely leaving Sevillistas wishing he’d not returned, and they could have been left with warm memories of his greatness rather than constant, if fleeting, reminders of how his promise was never fulfilled.

Until El Derbi Andaluz, Reyes’ performance was bewitching. In taking Mel’s record for fastest goal in the fixture he not only set the tone for the match, he also stuck it to one of the totemic figures of Seviila’s great enemy, and to fans that sort of thing matters. A lot.

And that’s why that performance is so cruel. It represents a false dawn. Jose Antonio Reyes won’t hit those heights again. This isn’t the beginning of his rebirth. Sevilla fans will be buoyed by the hope that he can maintain this level, but the fact is that his display was a fluke, an isolated bubble of memory rising from the wreck of a promising career.

It won’t happen again and the fans’ expectations that it will merely adds to this self-fulfilling prophesy: the pressure to repeat will ensure Reyes can’t do it. He’s not cut from that sort of cloth. Defiance isn’t in his nature.

In the future, the last spasm of Reyes’ talent will be revered by Sevilla fans. The perspective of memory changes everything, and long after Reyes has retired, his legacy will be created and his career reinvented. He will be recalled as the kid genius who went off to see the world, but returned to set up one of the club’s greatest moments.

Living through the mediocrity, the disappointment, the bitter betrayal of thinking he was back but finding he wasn’t will be forgotten. It’s like when cricket fans deify Ian Botham, lionising his great feats but selectively forgetting his long, impotent decline in a weak England side.

Jose Antonio Reyes will disappoint. Football disappoints. If you don’t know that yet, you’re young. But you’ll learn.

Mark Griffiths is a commentator and freelance football writer. You can read more of his work at PeripheralVision.me or follow him @peripheralfooty.