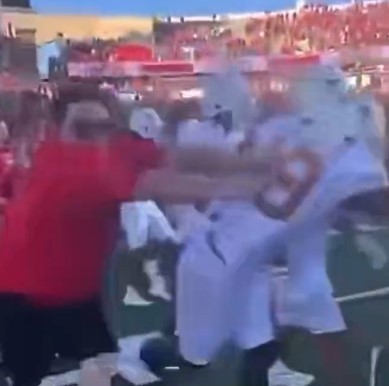 It was a wild game of football in Lubbock on Saturday. Texas Tech clinched a dramatic overtime won against their Longhorn rivals and the fans stormed the field. In the melee, UT player, Ovie Oghoufu was shoved ferociously in the back by a Texas Tech fan. That fan is now wanted by Texas Tech police.

Texas Tech thought they had clinched victory over the Longhorns when a field goal put them ahead with about 20 seconds left on Saturday. However, UT had other ideas and marched down the field to square the game up. After a Bijan Robinson fumble on the first play of OT, it wasn’t long before the Red Raiders were celebrating for real.

After Trey Wolff kicked the game winner, fans inevitably stormed the field. These things are to be expected. But what we don’t expect or condone are cheap shots against dejected, tired opposition players.

Ovie Oghoufu was walking to the locker room with his head down when he was clattered from behind. The cheap shot came from a Texas Tech fan who was running full steam and appeared to know what he was doing. After the clash, the fan took off running, barely stopping to look at Oghoufu, who was understandably caught off guard.

A Texas Tech fan pushed a Texas player after storming the field 😳 pic.twitter.com/EqebD6q5X4

Texas Tech hands it over to campus police

After the video emerged on Twitter, Texas Tech released a statement condemning the action. Additionally, they asked that anybody with information regarding the incident get in touch with Texas Tech police. Their statement read,

“A video clip of a fan pushing a University of Texas student athlete was recently brought to our attention. This behavior is unacceptable and Texas Tech Athletics has turned the matter over to the Texas Tech Police Department. We will together to identify the fan and take further action.”

This individual’s actions are not representative of Red Raider values.

If you have any information to help us identify this individual, please contact @TexasTechPD. pic.twitter.com/IGKDxC7JOP

Their Twitter account was also keen to stress that the actions did not represent the values of the Red Raiders.

There is no word on whether Oghoufu was hurt or not, but we can’t imagine this was even close to the worst hit he’s experienced in his playing days.