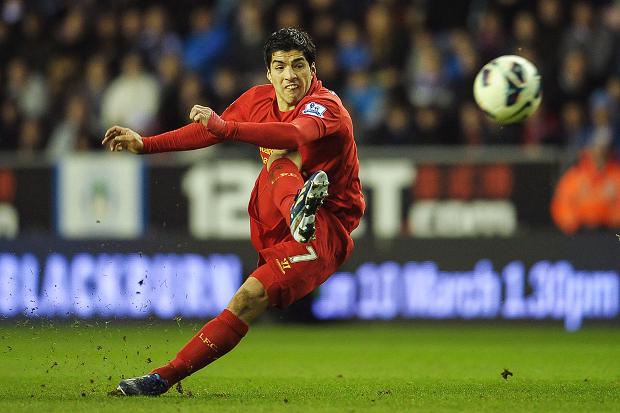 It has been 4 seasons in a row now that Liverpool have failed to qualify for the Champions League. For a club that boasts of 5 European Cup wins, that is a serious matter of concern. Roy Hodgson, Kenny Dalglish and now Brendan Rodgers have all tried unsuccessfully to get The Reds back where their fans think they belong – the Champions League. 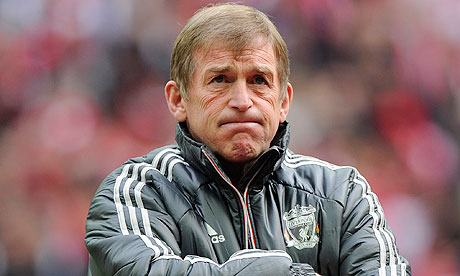 King Dethroned: Kenny Dalglish could only manage an 8th place finish in his only full season as Liverpool manager

Last season under Rodgers though, was certainly an improvement from the two campaigns previous to that. Even though they never seriously posed a threat to get into the top 4, there was a feeling around the club that the rebuilding process was going on successfully. Steven Gerrard had a great season, while striker Luis Suarez was arguably the best player in the Premier League as a whole. Additions to the side like Jose Enrique and Daniel Sturridge further strengthened the side.

This Season So Far:

Liverpool have certainly kicked on from where they left of at the back-end of last season, picking up 10 points in their opening 5 games and currently occupying 5th place in the Premier League table. They won their opening 3 games, before drawing 2-2 away at Swansea. Their latest match though, saw them slump to a shock 1-0 home defeat against Southampton.

This is not the first time Liverpool have lost to lower sides at home in recent times. While they are able to be at the top of their game against the big teams, they look slack and poor against teams from the bottom half. This complacency and inconsistency is something Rodgers will have to eliminate if Liverpool are to stake a claim to finish in the top 4.

The Return of Luis Suarez:

Luis Suarez was given a 10-match ban by the FA following an incident against Chelsea last season that showed him appearing to bite Branislav Ivanovic. This made Sturridge take on the role of the main striker in the team. Though the Englishman did more than just a decent job, there is no doubt that Suarez is still Liverpool’s primary marksman.

The Uruguayan will make his long-awaited return on Wednesday in the Capital One Cup third round tie against Manchester United at Old Trafford. He is sure to be the centre of the limelight no matter what happens.

His return will be a huge psychological lift to Liverpool. Suarez scored 30 goals last season in all competitions despite his ban, with some absolutely exquisite strikes. His dribbling flummoxed nearly every defender he played against, and his finishing too was top-class. Liverpool faced a huge battle to keep him at Anfield in the summer, and if they don’t finish in the top 4 this time either, they will most certainly lose him to a bigger club.

Beauty or The Beast? : There’s no doubt that Suarez is world-class….. 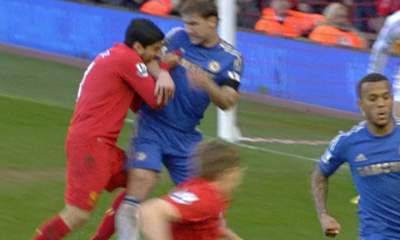 …..but he also has an ugly side to his game, as this bite on Ivanovic last season shows

But can Liverpool finish in the top 4 this season? The teams standing in their way are Arsenal, Tottenham, Manchester United, Manchester City and Chelsea. They will have to finish ahead of at least one of these sides to qualify for the Champions League this season. On paper, their side looks the weakest among these teams, but if Rodgers is able to get the best out of his individuals, finishing in the top 4 will not be an insurmountable task.

Their defence has looked sound, and their midfield has performed decently well too. Steven Gerrard has mastered his role as a deep-lying playmaker, while Jordan Henderson has looked sharp as well. Philippe Coutinho makes Sturridge a much better player with his outstanding creativity and vision, and there is no doubt that he can also do it with Suarez. The return of Suarez will see him Iago Aspas dropped from the starting XI. Aspas has been looked good alongside Sturridge after his summer move from Celta Vigo but hasn’t managed to find the back of the net thus far.

Suarez though, has no such problems in front of goal. Rodgers will hope though, that he can stay out of trouble and be available to play for the majority of the season. Along with Sturridge, he can forge a deadly partnership which may well lead Liverpool into the Champions League at long last.