Following a turbulent summer with regards to the Luis Suarez saga, one would forgive Liverpool if they started the season poorly, amidst a backdrop of uncertainty and instability at the club. The truth is however, the red half of Merseyside are in fine fettle, indeed this is now their finest start to a top flight campaign since the 1994, when they had a front two of Robbie Fowler and Ian Rush.

The clouded status of Liverpool’s superstar Suarez, had thrown the club into relative turmoil amidst a summer of shrewd and very well thought out player recruitment, including the acquisitions of Iago Aspas, Luis Alberto and Kolo Toure all, of which have added depth in different areas of the squad.

The difference in Liverpool’s bright start though is in players that the Reds already retain. To say Daniel Sturridge has started this campaign in revelatory fashion would be a disservice to the former Manchester City, Bolton and Chelsea forward. The signs were there for all to see in the second half of last the season, from the moment Brendan Rodgers signed him up.

From his opening league outing – also against Manchester United -Sturridge displayed a predatory instinct that Liverpool had lacked since Fernando Torres and even – some may say – as far back as messrs Fowler and Rush in their heyday. The Birmingham born forward netted 10 times in 14 games from January to May.

In the opening three games of this term, Sturridge has exhibited such a display of not just clinical finishing but also an array of skill, it is difficult to understand how Chelsea could let such a burgeoning talent go. His goal against Villa last week was sublime; bringing it under control after a deft leave from Phillippe Coutinho. taking three touches; one toward the goal, away from Brad Guzman with his right and slotting the ball high into the net, with his left. It really portrayed all of Sturridge’s talent that he has in his locker.

His goal against the champions on Sunday utilized another tool he has in spacial awareness. To find the space away from Nemanja Vidic and Rio Ferdinand and to react as Agger flicked a corner goalwards and for Sturridge then to flick the ball into the net, just over the stooping header of Tom Cleverley, on the line.

Brendan Rodgers has clearly reinvigorated the man who had not been himself at Chelsea and and speaking to the Guardian, Rodgers believes that Sturridge could be a world beater:

“It’s about consistency. Strikers are judged on goals in games and if you judge him on that his record’s very good. But it’s still very early, he has a lot more to do, but there is no question he’s potentially the top English striker. He’s got all the tools to be that. He can move, he can sprint, he’s a really good footballer as well, he’s not just a goalscorer.”

“If you look at Daniel Sturridge and what he has, as long as he continues and keeps his fitness, he would be a big threat for any team. You’d look at him and people would think he’d maybe be a Brazilian striker with his body physique and his pace and power. England are fortunate to have him because he’s a big talent but he knows he needs to be consistent, he needs to get himself the games and the goals. I have got no doubt, though, that he will be a massive asset for England.”

Whilst it would true to state that Daniel Sturridge is the Red’s only scorer thus far (all in one-nil victories) the other elements of Brendan Rodgers gameplan have so far paid off handsomely. Coutinho and Iago Aspas have added real width in the attacking areas, but also Jordan Henderson. The much maligned midfielder who moved from Sunderland two summers ago for £15m has come on leaps and bounds under Rodgers, not least as he has been deployed on the right wing – coming inside the full back where he seems to enjoy it – and not centrally where his game was still developing under Kenny Dalglish. 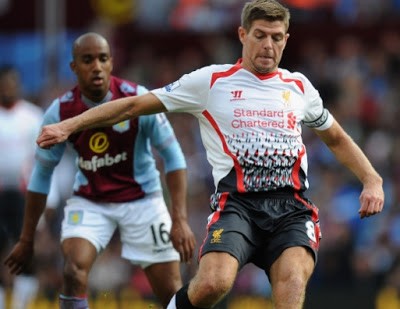 Probably the biggest difference to note in this Liverpool set-up is the role that Lucas and Steven Gerrard play in tandem with Dani Agger and Kolo Toure. Gerrard simply doesn’t have the agility for the most part anymore to get forward and get back and Henderson has taken the reigns from him. Instead, in the three games thus far this season, Gerrard has played a deeper lying role next to Brazilian Lucas. He almost sits in front of the defence line and operates as a Javi Martinez or Yaya Toure type as not just a holding midfielder, but the man who gets the tackle that cuts out an attack before it gets onto the last line of defence.

Gerrard has won 72% of tackles in the defensive third as well as 8 eight interceptions and nine clearances. This was particularly evident at Villa Park, when the England captain was there to cut out Fabian Delph and Gabby Agbonlahor on more than one occasion to break down Villa’s attacks, in supplying Christian Benteke. Gerrard still bombs forward occasionally but he is more of a defensive presence thus far.

Liverpool now top the table with a 100% record. With games to come that – in current form at least – are eminently winnable and with the nearest stumbling block potentially away to Arsenal at the 2nd, two months away, the Reds have a golden opportunity to get a serious amount of points on the board and with no Europa League distractions this really could be their best shot at not only top four, but an outside shot at the top three and a return to Europe’s top table. And all this without Luis Suarez.

But this is only September…