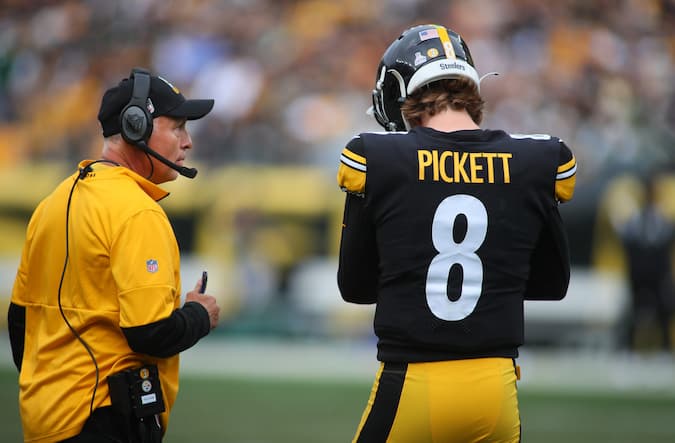 After lots of controversy surrounding the Pittsburgh Steelers starting quarterback, it looks as the dust has settled, finally.

Rookie Kenny Pickett saw his first action of the season on Sunday when he replaced Mitch Trubisky in the second half, and it looks like the first-year quarterback will be the starting QB moving forward.

The #Steelers are expected to move forward with rookie QB Kenny Pickett, sources say, as the first-rounder is set to replace Mitch Trubisky in the lineup. Pickett saw his first action on Sunday and is slated to be the QB moving forward. pic.twitter.com/Lc2ZiMerlg

Pickett responded to his first appearance by going 10-of-13 for 120 yards. Although, the three incompletions that he had were interceptions, however they were overshadowed by his pair of rushing touchdowns. Following his debut, Pickett became the first quarterback in league history to rush for two touchdowns in his first career game.

Pickett was the No.20 pick overall in the 2022 NFL Draft, from Oakhurst, N.J. starred at Ocean Township High School, and finished third in voting for the 2021 Heisman Trophy award. He was the first New Jersey native to be a finalist for the Heisman since former Michigan star and ex-Giants defensive back Jabrill Peppers in 2016.

Can Pickett help the Steelers turn their season around?👀 pic.twitter.com/pRr0oxxkxV

He’s got a big future ahead of him, and if he continues as he’s started, he will be keeping Trubisky out of the team indefinitely.