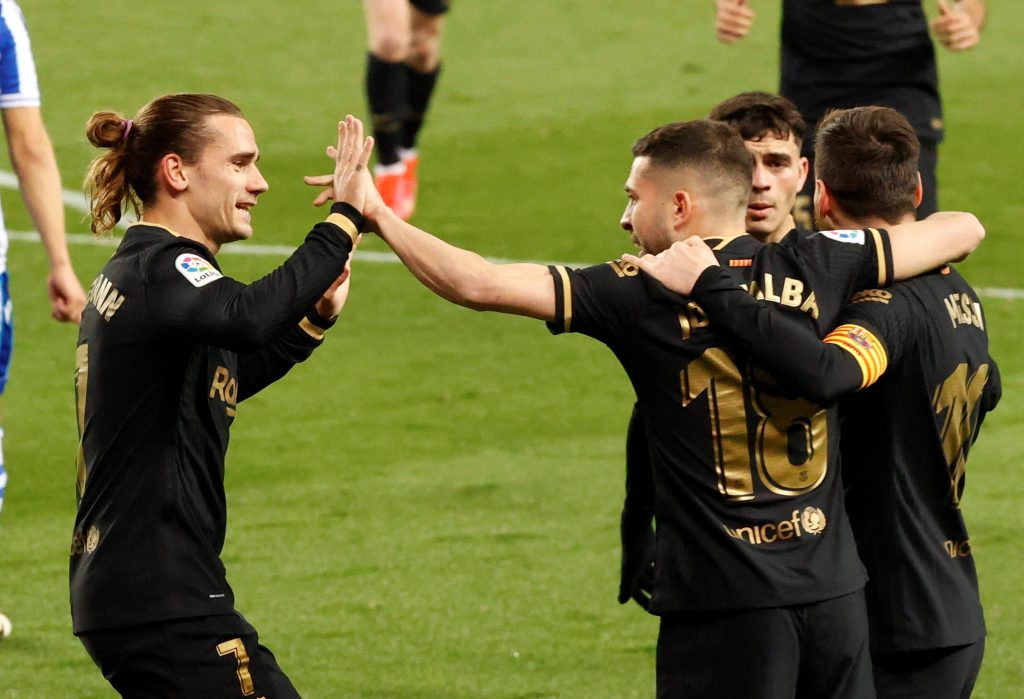 Barcelona put in a brilliant display against fifth-placed Real Sociedad on Sunday, winning 6-1 to keep the pressure on league leaders Atletico Madrid.

It took a while for the game to get going. The first chance fell to the hosts when Alexander Isak took advantage of a poor pass by Frenkie de Jong. The Swede cut inside from the left and forced Marc-Andre ter Stegen into an important save.

Barcelona weren’t showing much threat but almost took the lead through some generous goalkeeping. Sergino Dest’s mishit cross appeared to be heading straight into the arms of goalkeeper Alex Remiro, but the Spaniard spilled the ball onto his own crossbar.

However, the visitors took the lead a minute later in familiar fashion. Lionel Messi fed the ball to Jordi Alba down the left. The full-back’s low cross was squandered by Ousmane Dembele, but Antoine Griezmann was on hand to smash home from close range.

Real Sociedad almost got themselves level immediately. Isak again was the beneficiary of a misplaced pass by Ter Stegen, but the German produced a strong right hand to stop his low drive.

Shortly before half time, La Blaugrana doubled their lead. Sergio Busquets found Messi, who weaved forward and slipped a pass through to Dest. The young American slammed a shot into the far corner for his first La Liga goal.

Within ten minutes of the restart, Ronald Koeman’s men were out of sight. Dest managed to notch again, this time tapping in from Alba’s cut back.

Of course, it wouldn’t be long before Messi got himself on the scoresheet. The six-time Ballon d’Or winner received a beauty of a pass from Busquets and lifted the ball into the net from close range.

The away side made it 5-0 not long afterwards, with Dembele getting in on the action. Moments after having one ruled out for offside, the Frenchman picked up a pass from Ilaix Moriba and finished low after a fine solo run.

There was some consolation for La Real in the closing stages. Ander Barrenetxea produced some excellent footwork to beat several Barcelona players, exchanged passes with Carlos Fernandez, and unleashed a perfectly placed shot into the top corner.

But the scoring was not done there. In the dying moments of the game, La Blaugrana put the finishing touches on a wonderful performance with the best goal of the night.

Alba picked the ball up from Messi out on the left, played a one-two with substitute Riqui Puig, and cut back for Messi to finish at the near post. It was the perfect way to round off a brilliant night.

Man of the Match – Sergino Dest

Frankly, this could have gone to several Barcelona players – and it probably should go to Lionel Messi. But the Argentine often gets the headlines, so let’s allow someone else to have the spotlight.

The youngster showcased his immense potential with a brilliant attacking performance from the right-wing-back position. Even in the slow opening half-hour, Dest was looking like Barcelona’s biggest threat.

And, when he got his opportunities, he took them excellently. The first was a fantastic finish, expertly dispatching his strike into the far corner. And the second was one that any good goalscorer would be proud of – bursting to get into the right area for a tap in.

The 20-year-old enjoyed his best night in a Barcelona shirt, and we suspect there could be much more to come from him.

Has Koeman got Barcelona back to their best?

Not long ago, the Catalan giants were looking like an absolute mess. They were way behind Atletico Madrid in the title race, behind in the Copa del Rey semi-final tie against Sevilla, and had just been humiliated by Paris Saint-Germain in the Champions League.

Eight games later, and Barcelona are playing confident, attractive, cohesive, and devastating football. They turned it around in the Copa del Rey, caught up to Diego Simeone’s side, and restored a bit of pride against PSG.

Sunday night’s game encapsulated the recent mini-revival under Ronald Koeman. Before the game, Real Sociedad had the third-best defensive record in La Liga – yet they were carved open time and time again with ease.

For the first time in a while, Barcelona seem to be playing as a team as opposed to a group of individuals. Koeman has managed to find a system that suits their skillset. It’s not normal to see them stray from the 4-3-3 that won them so many titles in the past, but the Dutchman’s 3-5-2 is producing some great results.

Despite his slow start to the season, Lionel Messi is now top of La Liga’s goal and assist charts, having registered a goal contribution in 14 (yes, FOURTEEN) league games in a row.

Sergio Busquets, who was written off by many in recent months, is pulling out some stellar performances. Frenkie de Jong is fulfilling every inch of his potential. Jordi Alba is looking like one of the world’s best left-backs again. Pedri is arguably the best teenager in world football.

Antoine Griezmann is starting to look like the player he was at Atletico Madrid. Ousmane Dembele is beginning to show some confidence. Marc-Andre ter Stegen is still one of the world’s very best goalkeepers.

And there are still several top-class youngsters coming through. Not to mention, the likes of Ansu Fati and Philippe Coutinho are yet to return from injury.

Barcelona aren’t a perfect side right now. After all, Martin Braithwaite remains their only out-and-out striker. But the foundations are there to build a side worthy of competing with Europe’s very best – and that may be the key to keeping Messi at the Camp Nou.

Only ten games remain in La Liga for Koeman’s side, including crunch fixtures against Real Madrid and Atletico Madrid. If they continue their form after the international break, there’s no reason why they can’t expect to win the league again.