Good day Arsenal fans! Have you guys recovered from the Alexis Sanchez-hangover yet? Well, Catalan newspaper Sport has something exciting for you. They claim Arsenal have sealed a deal for German midfielder Sami Khedira.

Spanish press have been reporting this for sometime now that Khedira could leave Real Madrid in the summer. The Los Blancos are all set to sign Toni Kroos from Bayern Munich which further pushes him away out of Bernabeu exit doors.

According to Sport, Arsenal have sealed a deal for Khedira, world cup winner with Germany, thought to be the region of €29m. The 27-year-old will sign a four-year-contract at the North London club, where he will earn around €10m per year. 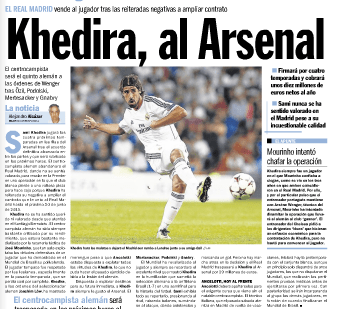 Chelsea were also thought to be interested in the German star, as Jose Mourinho had previously worked with him at Madrid. The report claims Mourinho had tried to hijack the deal but Khedira chose Arsenal instead.

Arsenal have a huge pool of German players and Khedira will find life bit easier at the London club. But most importantly, he will bolster the Gunners midfield to a huge extent.

This is turning out to be a terrific window for Arsenal. Already they have signed Alexis Sanchez from Barcelona and should they pull off a deal for Khedira as well, surely they will be considered as a serious threat for the Premier League title next season.

Let us not get too carried away at the moment. The report has come from a Catalan based newspaper and not from sources in Madrid. I checked Marca, AS and El Confidencial this morning and they haven’t covered any report on this, as yet.