QOTD – Question of the Day, is a new segment at Soccerlens, which is aimed only for the football fans, that is you, to take part in a healthy football debate and discussions about the beautiful game.

Davis Moyes would be a relieved man on Sunday for more than one reason. It was not just another routine victory for Manchester United; it meant lot more to him and his team, even at this early stage of the season.

On personal front, the pressure has been lifted off his shoulders. By registering a victory against a top opposition, something which he failed to do more often throughout his Premier League career, not only has he arrested the possibility of sliding down further in the league table but ensured the Champions remain in the title-hunt with the point-gap being reduced to five points only.

Things were starting to fall in place after their shock 2-1 defeat at the hands of West Brom in September at Old Trafford. United strongly bounced back and remained 8 games undefeated in all competitions. But, still they were eight points behind Arsenal, a team that won 15 of their last 16 games away from home. A sharp response was needed. A strong response delivered.

We easily gets swayed by stats and chalkboard diagram these days but Sunday’s game was the best example where Manchester United showed old school fashioned qualities of blood, sweat and determination. Wayne Rooney puts it aptly as quoted by The Times (we present you the screen-shot of the article): 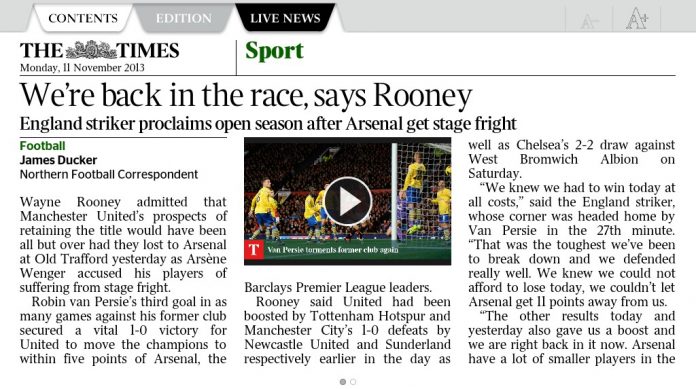 “We knew we had to win it at all costs. That was the toughest we’ve been to break down and we defended really well. We knew we could not afford to lose today, we couldn’t let Arsenal get 11 points away from us.”

Goal-scorer Robin van Persie added: “It was a six-pointer. Now we are five [points behind] and we are right in the mix. You need to be strong as a team.”

The title race is ever closer this season, with 9 teams are separated by 6 points only, with the 9th team being the potential title challenger Manchester City. David Moyes has won the battle, the question here is – can he win the war?