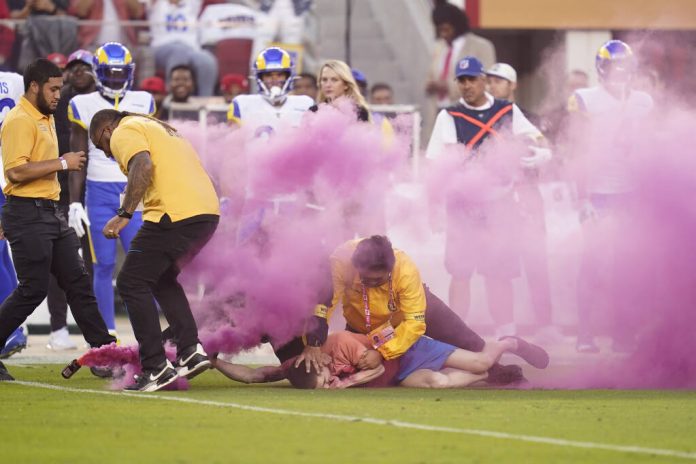 The animal rights protester who was tackled on the field by Rams Linebacker Bobby Wagner during Monday night football has filed a police complaint following the accident.

When an animal rights activist ran onto the field during the Monday night football game between the Rams and the 49ers, Rams linebacker Bobby Wagner took the situation into his own hands, as he tackled the protester to the floor.

Bobby Wagner stopped the fan who ran onto the field 😳

The protester from the now viral video was quickly identified as Alex Taylor, who is a member of activist group Direct Action Everywhere which is an animal rights group.

According to TMZ reports, the protester went to the police after the game to file an official complaint of ‘blatant assault’ against not only Wagner, but the teammate who assisted him with the takedown as well.

A spokesman from the Santa Clara police department made a statement on Wednesday, saying that an official complaint had been filed after the game.

“It’s an active investigation. I can confirm a person did come in [on Tuesday] at 1.45pm and filed a report. However, it’s an ongoing investigation, so we’re not able to release details at this time.”

Wagner also spoke on the incident following the game, explaining his frustration at the activist causing havoc during the match.

“That’s not making a play. That’s just keeping it safe.

I was scared for my life, he could have had a bomb, Bobby Wagner saved our lives.

“One of the [security] guys on the other side, it looked like he got hurt, and security looked like he was struggling, so I was frustrated, so I took it out on him.”

Time will only tell where the investigation goes however having been tackled by a 240lb Super Bowl champion, activist Alex Taylor will certainly be licking his wounds.