As most of Europe is celebrating Christmas, people in England prepare for the second round of fixtures over the holidays. With striking results on Boxing Day, the Premier League teams are ready for action on the weekend.

Manchester City were shocked at the Stadium of Light as they succumbed to a 1-0 defeat and they now trail by seven points against Alex Ferguson’s men who picked up a thrilling 4-3 win against Newcastle. Stoke also put in a fine display and won 3-1 against Liverpool. 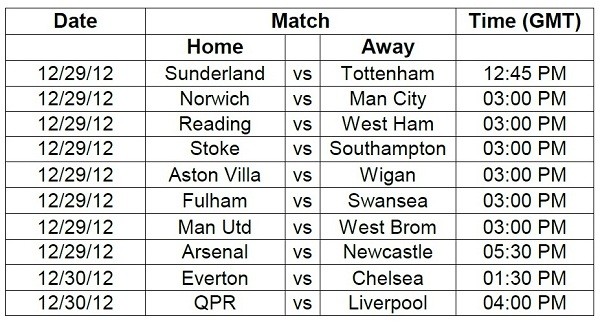 The football betting match previews of the important fixtures from this weekend:

Manchester United have a terrific record against West Brom and at 1.3 with bet365 and Betfred look bankers to beat them at Old Trafford.

The Red Devils have won 10 and lost none of their 12 Premier League games against the Baggies, and the visitors have won none and lost 10 of their last 13 trips to Manchester.

Sir Alex’s side come into the game 7 points clear of their nearest pursuers in the league following a dramatic 4-3 win over Newcastle on Boxing Day, and despite letting in goals are scoring plenty at the other end.

Nani and Hernandez have both scored in two of their three appearances against the Baggies, and can be backed at 9 and 5 respectively with bet365 in the first goalscorer market.

Robin van Persie, who has now scored 61 goals in his last 74 Premier League appearances since January 2011, is not surprisingly favourite once again to break the deadlock at 3.5 with Paddy Power makes plenty of appeal to do so.

Those scorelines can be backed at 9.5 and 13 respectively with Paddy Power.

Tottenham face a potentially tough trip to the Stadium of Light to take on Sunderland (12.45pm KO, Live on Sky Sports 2) but look worth a wager at 2.1 with bet365 to come away with all three points.

The stats are mixed as far as the Lilywhites are concerned.

However Andre Villas-Boas’ side are the only Premier League team to score in every away game this season and come into this having kept clean sheets in the last three games.

That suggests that they are worth a wager at 3.5 with Paddy Power to win to nil.

Jermain Defoe has scored 10 and assisted two goals in 18 starts this season and once gain heads the betting in the first goalscorer market at a top priced 6.5l.

However my money is going on Gareth Bale at the 7.5 with Paddy Power.

The Welshman has equalled his best-ever goals total in a Premier League season (nine; set in 2011-12) in only 16 appearances and scored a hat-trick in Spurs’ 4-0 drubbing of Aston Villa on Boxing day.

Arsenal are 1.44 with bet365 and Betfred to beat Newcastle United at the Emirates, and looks worthy odds-on shots to do just that.

The Gunners notched their third consecutive league win with a 1-0 victory at Wigan last weekend, and now sit in seventh place in the league.

The stats are also very good as far as this fixture is concerned, as Newcastle have won just one of their last 10 Premier League games against them (W1 D5 L4).

The last 10 meetings at Emirates Stadium have also resulted in 7 wins for Arsenal, 2 for Newcastle, and a draw.

Alan Pardew’s men have also failed to find the net on four occasions in that period whereas Arsenal have managed to at least two on five occasions.

That suggest that over 2.5 goals is a decent punt at 1.67 with Betfred, and Arsenal to win to nil at 2.5 with Paddy Power also makes plenty of appeal.

Santi Cazorla is the leading goalscorer in the league for Arsenal this season, and looks a bit of value at 8 with Paddy Power to net the opener.

As far as the correct score market is concerned a 3-0 win for Arsene Wenger;’ men appeals most at the 10 on offer with Paddy Power as it is a scoreline they have managed in two of the last four meetings between the pair at the Emirates.

Manchester City are 1.57 with bet365 and Betfred to bounce back to winning ways in their game against Norwich City at Carrow Road, and everything suggest they will do just that.

Roberto Mancini’s men suffered a shock 1-0 defeat at Sunderland on Boxing Day, a result which means they have won just three of their last seven league games.

However the stats are really good as far as this game is concerned as they have won five and lost none of the last six games against the Canaries in all competitions.

That suggest they are worthy odds-on shots to beat the Canaries who have lost two of their last three home games.

Sergio Aguero who scored three goals in the two games against Norwich last season and makes plenty of appeal at 4.75 with bet365 to bag the opener.

Another bet that looks a bit of value is for City to win to nil at a very tasty looking 2.62 with Paddy Power as it’s hard to see where a Norwich goal will come from.

Liverpool travel to Loftus Road to take on QPR (4pm KO Sunday, Live on Sky Sports 1) and the stats suggest they are worth a punt 1.95 with Betfred to come away with all three points.

The Reds threw away a 1-0 lead when going down 3-1 at Stoke on Boxing Day and Brendan Rodgers’ side will have to defend much better in this.

They also need to start putting away chances at the other end of the pitch and their failure to do so means that their current points tally of just 25 after 19 games is their lowest since the three points for a win rule was introduced.

The good news is that they face a side who have won only one of their opening 19 games, and an on song Liverpool should really be able to take care of them with the minimum of fuss.

Luis Suarez is averaging 4.6 shots per game this season, no other player in the Premier League is averaging more than 3.5 and looks a decent price at 5 with Betfred and Paddy Power in the first goalscorer market.

Another bet that appeals is for Liverpool to score first at 1.67 with Betfred as no team has scored fewer first half goals than Rangers this season (6).

Chelsea are 2.5 shots with bet365 and Paddy Power to beat Everton at Goodison Park (1.30pm KO Sunday, Live on Sky Sports 1) and are fancied to come out on top in what promises to be a really tough encounter.

The stats are certainly not good as far as the Blues are concerned as Everton have lost just one of their last eight Premier League games against them (W3 D4 L1).

David Moyes’ side are also one of only two teams with an unbeaten home record in the top flight this season – along with Stoke City – and no team has lost fewer league games than them this season.

However it’s not all doom and gloom as far as Chelsea are concerned as Rafael Benitez has won five and drawn one of his last six league meetings with the Toffees.

Over 2.5 goals also looks worth a wager at 1.91 with Boylesports.

Juan Mata has now scored or assisted 14 goals in 16 appearances in the top flight this season and looks decent value at 8.5 with bet365 to net the opener.

I am going to take Chelsea to edge it 2-1, and that outcome is priced up at 9.5 with Betfred.