Manchester United travel to the Emirates on Wednesday to take on old foes Arsenal, with David Moyes side eager to get back to winning ways after a poor draw at the weekend. 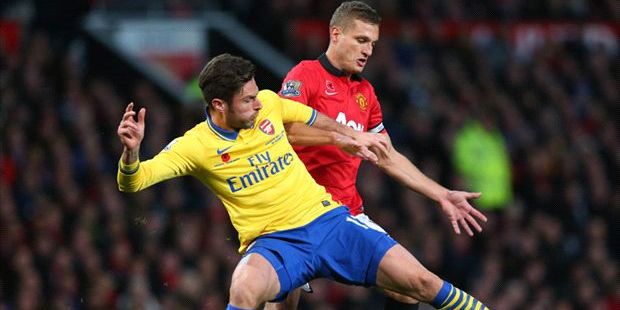 David Moyes’ side could only manage a 2-2 draw with bottom side Fulham at Old Trafford on Sunday, with the Cottagers describing United’s game plan as ‘straightforward’ after the game.

Their trip to Arsenal is arguably the most important in years, with fourth place looking further and further away for United. A win at the Emirates could well breath new life into their Premier League season however, while a defeat could effectively end it.

Defence: Moyes recalled Rafael to the starting lineup on the weekend, and could keep faith with the Brazilian, and with Jonny Evans and Phil Jones struggling with injury, Chris Smalling is set to remain beside Nemanja Vidic in the heart of defence.

Midfield: Darren Fletcher should retain his place in central midfield due to Jones’ injury concerns. Adnan Januzaj will be vying for a starting place, having had a hand in both United goals against Fulham, with Ashley Young potentially giving way.

Attack: Robin van Persie should lead the line, with Wayne Rooney playing just off him. Moyes may opt for a fluid front four, with Mata and Januzaj dovetailing the attacking pair in a similar vein to Liverpool’s devastating tactics against Arsenal on the weekend.