Arsenal moved to the top of Group F in the Champions League after defeating Napoli 2-0 emphatically last night at the Emirates, where club-record signing Mesut Ozil bagged his first goal for the club. 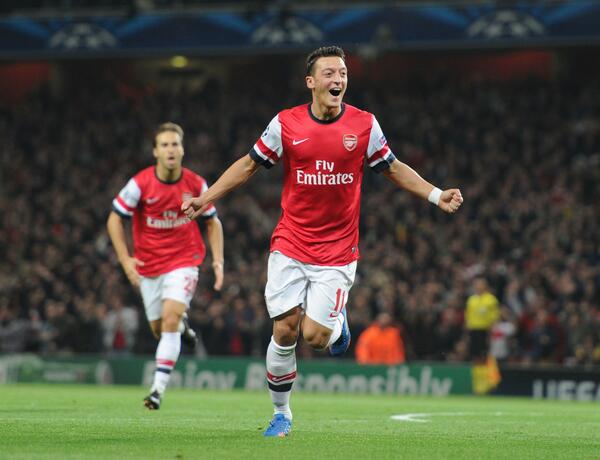 Ozil, who joined Real Madrid on the transfer deadline day, opened his scoring for the Gunners with a beautifully controlled finish from just outside the box.

The German international aka the assist-machine bagged an assist to his name for the second goal, after putting this on plate for Olivier Giroud.

Arsene Wenger quite naturally was very elated with the result but he was particularly pleased with the first half-performances. He noted:

“The first half is one of the best halves we have played for a long time. The second half was a bit more handbrake-ish – but you could see the third goal was there”

Arsenal players shared their reactions after the end of the match on social networking site Twitter. We bring you some of them here:

This is from Mikel Arteta

Lukas Podolski, who is injured at the moment and couldn’t play the match, expressed his reaction too.

From the darling-boy Mesut Ozil himself.

A wonderful team, wonderful fans – my first CL-game at home was unbeleavable. Thanks all. #championsleague, #arsenal.

Tennis superstar Andy Murray was also at the Emirates and he thought Flamini was brilliant against Napoli.

Was at arsenal vs Napoli tonight, top performance from arsenal… flamini has been a great signing love his work