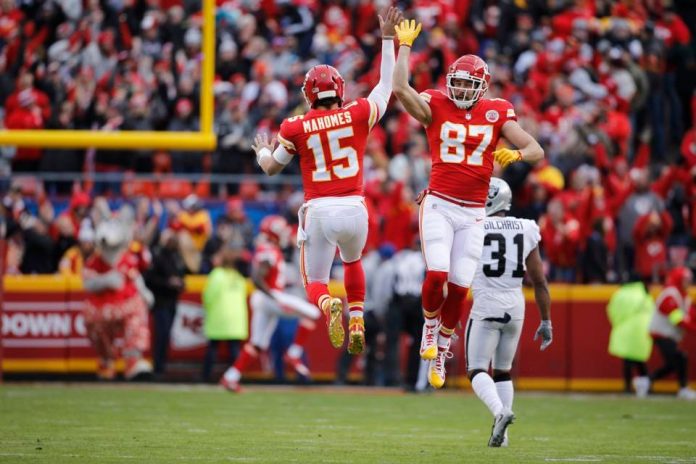 The Kansas City Chiefs managed to come back from 17 points behind against the Las Vegas Raiders on Monday night, with Patrick Mahomes and Travis Kelce putting on a show for their fans.

The Raiders had an opportunity to tie the game up with four and half minutes left on the clock, however head coach Josh McDaniels decided to go for the lead with a two point conversion instead.

Josh Jacobs stretched the Chiefs defence all night with 154 yards and a TD on 21 carries however the running back could not score when it mattered in the dying minutes.

The story of the game no doubt goes to Patrick Mahomes and Travis Kelce however, as the Chiefs duo looked unstoppable (not for the first time) on Monday night.

Travis Kelce scored four touchdowns during Monday nights win, (all of which thrown by the prolific Mahomes) which is the highest score from a tight end since the 1985 campaign, as well as the second most TD’s in a game by a tight end in NFL history.

Kelce likened his QB to Houdini last week and this week the TE alongside Mahomes put on a real magic show for their fans with a truly unbelievable display.

“The NFL hasn’t seen anything like Mahomes — I promise you that. He’s the Houdini of our era”

The Chiefs take on the Buffalo Bills this weekend, as the side look to move to (5-1) this season in what has been a good start to the campaign.