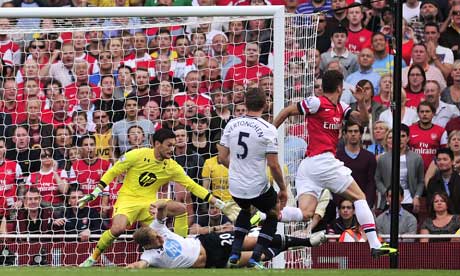 In a North London derby billed as ‘no spenders’ (Arsenal) vs ‘big spenders’ (Tottenham) it was Arsene Wenger’s side who deservedly triumphed on the day.

Spurs have signed many good players, but have sold a sensational one in Gareth Bale, and it showed. Andre Villas-Boas’ Champions League wannabes lacked guile, cohesion and an end product and, although it’s very early days, it was a worrying performance.

Spurs’ best player on the day was goalkeeper Hugo Lloris, which highlights how the rest of the side played. The French number one was outstanding from start to finish, rushing off his line several times and making some fine saves to thwart numerous Arsenal attacks.

The same cannot be said for the rest of the defence. Kyle Walker and Danny Rose can both be explosive full-backs but defensively they were constantly caught napping, with Theo Walcott, in particular, having a field day. Even Michael Dawson and Jan Vertonghen, usually one of the most consistent centre-back pairings in the Premier League, looked shaky and lacking in communication.

Although defensively they were poor, it was in midfield that Spurs were hugely lacking. The trio of Moussa Dembele, Etienne Capoue and Paulinho are all undoubtedly very good players in their own right, but they all appeared to playing the same role in the side. There were neat and tidy, hard-working and dependable, but there was absolutely no drive, creativity and ability to run at players. They were badly missing someone like Juan Mata, Santi Cazorla or David Silva to carve open Arsenal with a bit of magic. Perhaps Danish sensation Christian Eriksen will be the man to fill the void when he makes his way into the team.

Out wide, Villas-Boas’ side were also very predictable. Nacer Chadli looks far from a world-beater, and can only ever really cut inside onto his favoured right foot from the left hand side. He doesn’t have the pace to get to the byline, and against top defenders he looks as though he could be easily nullified. Again, like the three central players, Chadli is clearly a decent player with good technical ability, but he also appears to be very one dimensional.

Of the outfield players, Andros Townsend was the best on the day. His raw pace, dribbling and shooting was a constant threat, but is he really the answer? Like many wide players these days it is fashionable to cut inside rather than go on the outside, but it has both its pros and cons. It allows the player onto his stronger foot and into a dangerous shooting position, but it also encourages greedy play and a lack of service to the striker. Notoriously selfish players of this ilk, like Arjen Robben and Neymar, can get away with it because they are so good, but someone of Townsend’s quality will hinder more attacks than he enhances. The North London club missed Aaron Lennon’s more old-fashioned wing play.

This leads us to Spurs’ striker, Roberto Soldado. The Spaniard is clearly a prolific goalscorer with a wonderful record in La Liga, but he looks like a player who needs good service rather than creating pieces of genius by himself. Time and time again he got himself into good positions in the penalty area, but there was never a good final ball from Chadli or Townsend for him to show his true class. Although he has scored twice already in the league this season, both have been penalties and he has not exactly looked top class. If the service to him improves he will score regularly, but he will struggle in the current system.

I understand it is harsh to judge new signings this early in their career in England, but my gut feeling is that there is definitely something missing at White Hart Lane (other than Bale). Will record signing Erik Lamela really make a huge difference? Again he’s a left footed player who drifts in from the right. He looks elegant but does he have enough substance to his game?

After the international break Spurs could go on a superb run of form, and their new stars could gel into one of the best sides in the Premier League and prove me wrong. On what i’ve seen in their opening three games, however, the void left by Real Madrid’s new world record signing looks vast, despite the club spending over £100 million this summer.