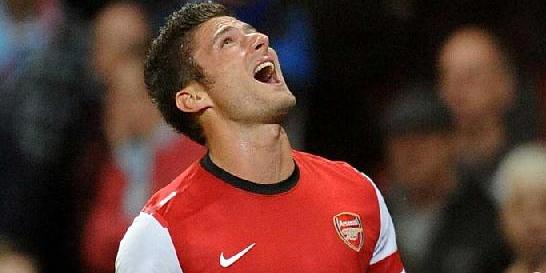 Arsenal’s record-breaking capture of German attacking midfielder, Mesut Ozil, has lifted spirits and anticipation in and around the Emirates Stadium to unfamiliar heights. Gunners fans are just itching to see their new £42.5m signing from Real Madrid strut his stuff, and they can envision a bright future with the 24-year-old in their midst. Ozil’s presence could spell the beginning of a return to prominence for the club, but much rests on the striking abilities of one Olivier Giroud.

After signing for a reported £9.6m move from Montpellier in 2012, the Frenchman had a hit-and-miss start to life in the Premier League. The big man often flattered to deceive, failing to really prove that he is the all-action centre forward that Arsenal so badly need.

However, Giroud has had a very promising start to the new season, notching up three goals in his first three Premier League games, and he looks much more comfortable in his surroundings. His touch has been exquisite at times, and he is currently a real menace around the penalty area for the Gunners. After the club failed to acquire a big-name striker in the summer transfer market, Giroud will be under increasing pressure to keep up his current form.

The push for Liverpool’s Luis Suarez was put to bed after the Uruguayan accepted that an exit from the club was not on the cards. Arsene Wenger has instead decided to throw his money behind providing Santi Cazorla with a very capable partner in crime.

Giroud managed an acceptable 17 goals in 47 games in all competitions last season, but with a plethora of creative talent now residing just behind the 26-year-old, Gunners fans will be expecting much more from their main and arguably only striker. Other than Giroud, only Yaya Sanogo and the much maligned Nicklas Bendtner are on the books as out and out strikers. And while both Theo Walcott and Lucas Podolski are technically strikers, they are generally deployed on the flanks.

The lack of strikers at the club has not dampened Jose Mourinho’s view of Arsenal. The Chelsea boss admitted on Wednesday that he blocked Demba Ba’s loan move to the Gunners because of Mesut Ozil’s transfer to the club,

‘There is no copy of him – not even a bad one. He is the best number 10 in the world. He makes things very easy for me and for his team-mates with his football vision and the decisions he makes.

‘Everyone loves him and sees a bit of Luis Figo and Zinedine Zidane in him.

‘We didn’t accept Arsenal’s offer for Demba Ba because the signing of Ozil makes them title contenders.

Quite a compliment from the Portuguese, but while Ozil is a brilliant signing, there are concerns around the club that the general excitement over German international’s signature has rather papered over a number of existing cracks in the Gunners’ war machine. The lack of depth in the striking department, and perhaps also in the defence, remains problematic, regardless of the genius of Ozil.

The big question of whether Arsenal can mount a sustained assault on the Premier League title exists still; and Olivier Giroud may have a big say on the outcome.