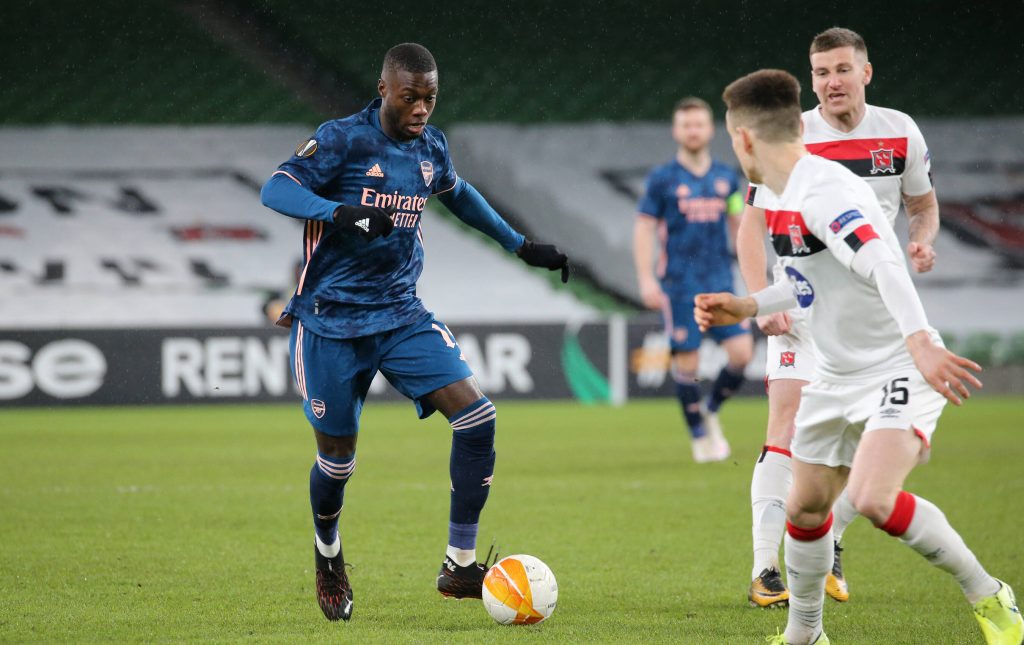 Arsenal manager Mikel Arteta has said that he has been impressed with Nicolas Pepe’s recent cameos off the bench, but the Ivorian needs to find consistency in his game.

Pepe came on as a late substitute at West Ham United last month, where he provided a quality right-footed cross which led to Alexandre Lacazette’s equalising goal to make it 3-3.

He was handed a start against Liverpool following the international break but failed to make the opportunity count as the Gunners lost 3-0 at the Emirates Stadium.

He was back as a substitute against Slavia Prague in the Europa League in midweek. He made another impact off the bench as he scored the opening goal in the 86th minute.

However, it was not sufficient to deliver the victory as Slavia equalised in the dying seconds of stoppage time, which could prove costly for the Gunners.

Ahead of tomorrow’s game against Sheffield United, Arteta was impressed with Pepe’s recent cameos but said that ‘he needs to be at that consistent level’.

He told Arsenal.com: “He has been really effective when he has come on as a sub, and he started as well against Liverpool, and now he needs to be at that consistent level.”

“We know that he is a threat – he has more goals than any other winger that we have, and that’s a big plus for us.”

Pepe has had a decent season with the Gunners, registering nine goals and four assists from 37 appearances across all competitions.

However, much more is expected from the 25-year-old, who was purchased from Lille for a club-record fee of around £72 million in 2019.

The emergence of Bukayo Saka and Emile Smith Rowe has reduced his playing time, and he needs to make the most of his opportunities.

The Gunners are already 10 points adrift of the top four with just eight games left, and Champions League through the league appears unlikely.

Arteta may rest some of the regulars tomorrow, and Pepe could be one of those who could be handed an opportunity from the starting line-up.

Should he impress, he could be in line to start against Slavia on the road in the second leg of the Europa League quarter-final next week.

The Gunners must score against the Czech champions to have any chance of progressing to the last four of the European competition.

Read: Arsenal willing to accept a cut-price deal for this midfielder.