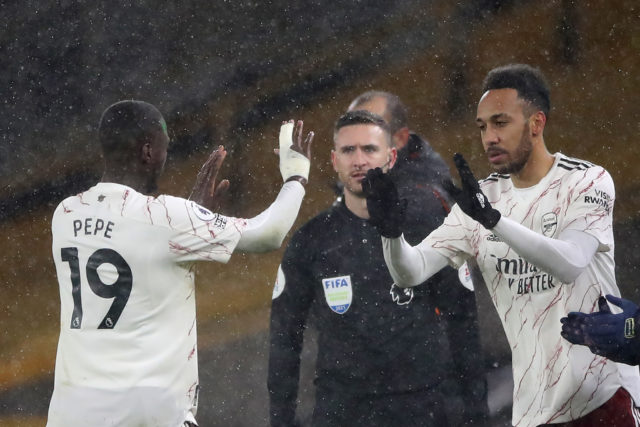 Arsenal boss Mikel Arteta has showered praise on Nicolas Pepe ahead of the team’s trip to Villa Park on Saturday.

The Gunners are heading into this game on the back of a 2-1 defeat against Wolverhampton Wanderers in the Premier League on Tuesday.

It was their first defeat in eight games, and Arteta felt they deserved something from the match.

The Arsenal boss was full of praise for Pepe ahead of the game against Villa.

The 25-year-old winger, who joined the Gunners for a club-record fee of £72 million, has struggled to make an impact in the first half of the season and he was heavily criticised after he picked up a red card against Leeds in November.

Arteta has claimed that Pepe has worked really hard in training and has improved in lots of areas. The Gunners boss now feels that Pepe has become a ‘real threat’, and expects him to continue his impressive form.

“That even when we made the decisions not to play him that he kept working hard. He has improved in a lot of areas,” said Arteta, as quoted by Football London.

“He’s been much more consistent through 90 minutes and he’s a threat at the moment. He’s been assisting players he’s been scoring goals he’s been a real threat. He needs to continue doing that.”

Pepe has made only seven Premier League starts this season, managing four goals.

He is a fantastic winger who enjoyed rich success at Lille. He is a player with great potential, and it is good to see him playing with a lot of confidence and justifying the hype around him.

Pepe was simply outstanding in the 3-1 win over Southampton. He also impressed during the 0-0 draw against Manchester United and scored in the last game against Wolves.

The Ivory Coast winger is finally showing the class that we all know he is capable of and his impressive form will only help Arsenal climb up the table and mount a challenge for European places.