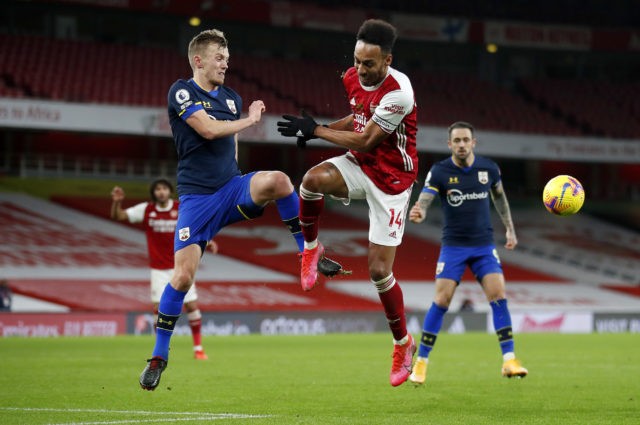 The 31-year-old missed out Arsenal’s 2-1 defeat against Everton at Goodison Park with a muscle injury, and it seems he will remain stuck on the sidelines.

Arteta has confirmed that the Gabon striker will undergo another scan in the next few days. He is not fully fit yet, and the striker is trying his best to get back to training as soon as possible.

“Auba is not fit for tomorrow, that’s for sure. He won’t be playing tomorrow so we will see who is available because we have a few doubts as well in other positions,” said Arteta, as quoted by Football London.

“Auba is feeling much better. He was more positive yesterday than the previous two days. He will have another scan the next few days and we will see how quickly we can get him back in the team. He knows how important he is for us and he feels the responsibility and he’s trying his best to be fit as quickly as possible.”

Blow for the Gunners

Aubameyang has struggled for goals this season. He has managed only four goals in all competitions so far, and struggles in the final third are proving to be a major headache for the Arsenal boss.

However, his absence is a big blow for the Gunners.

The north Londoners are going through a wretched form at the moment, having failed to register a win in their last seven Premier League games.

Eddie Nketiah started for Arsenal in the absence of Aubameyang against the Toffees, but the young striker failed to make a big impact.

Arsenal will welcome back Gabriel Martinelli from a long-term knee injury. The 19-year-old is an exciting player to watch, and he could get some game time against City.

It remains to be seen whether Nketiah keeps his place in the side. Alexandre Lacazette or Florian Balogun are other options available to Arteta for this game, with Arteta confirming that the latter could be involved on Tuesday.