Lionel Messi and Cristiano Ronaldo share a healthy footballing rivalry. As they play for arch-rival Barcelona and Real Madrid, media leads us to believe that there exists a strong rivalry between them.

In reality, this is all but a media created myth, as they need to sell papers and get website hits. It’s a part of their dangerous business, where sadly, two of the most’s successful footballers in the world at the moment are drawn into the vortex, where stories are created about them on a daily basis, often using ‘rivalry’ as a slant to generate interest among the readers.

Both Messi and Ronaldo are supremely talented individuals who try to deliver their best each and every time when they play for their respective clubs and country. They have shared 7 Ballon D’Ors between them and are arguably holds legendary status for the clubs already.

Lionel Messi has had an outstanding campaign for Barcelona this season. He has scored 43 goals for Barcelona in the La Liga and having won the treble with the Catalan club, he is a strong contender for winning the Ballon D’Or this year. 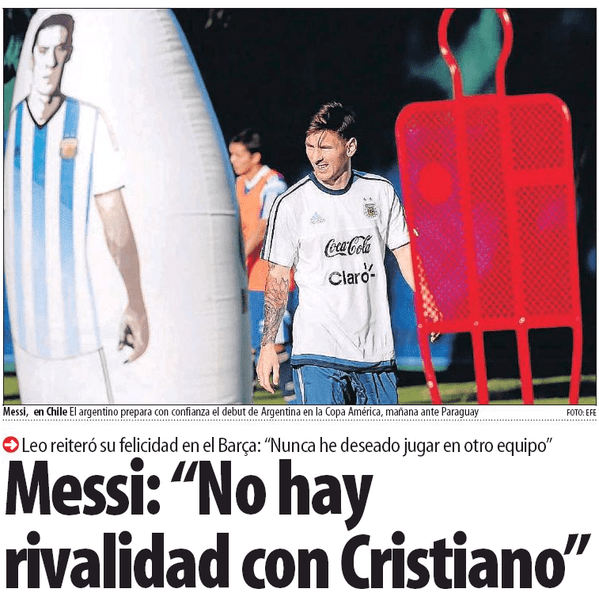 The little Argentine genius is keen to do well at the Copa America. He spoke about his perceived “rivalry” with Ronaldo in an interview with Mundo Deportivo:

“There isn’t any rivalry between Cristiano and myself. There never has been. That’s something which has been created by the media. We both want to do the best we can for our teams. It’s never been Messi vs Cristiano,” he said.

Messi was targeted by Arsenal when he was a kid. However, the deal didn’t materialise as he went on to represent Barcelona.

When asked what would have been if he had chosen to join Arsenal, who were interested in him, as a youngster: “It’s hard to say how it would’ve been because my education would have been completely different to the one I received at Barcelona.”