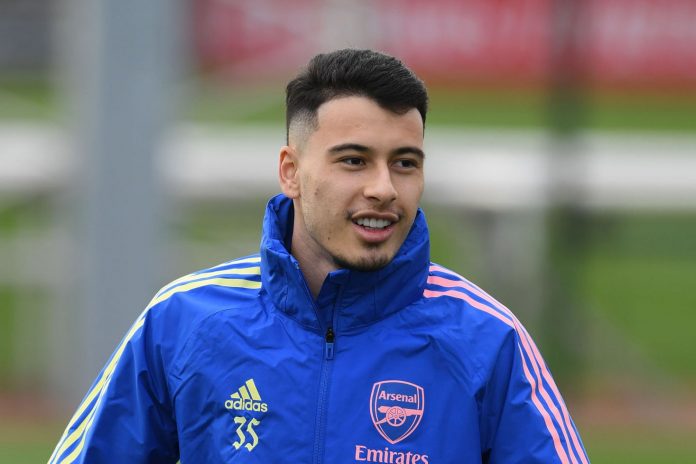 Gabriel Martinelli is expected to play for Arsenal’s Under-23 side by the end of December as he looks to step up his return to full fitness.

The 19 year old suffered a knee injury in training on June 21st which has seen him sidelined for the last five months. Prior to his injury, Martinelli was enjoying a breakthrough season in his first year at Arsenal and had established himself as one of the club’s most important players.

Last season, he scored ten goals and provided four assists in 26 games across all competitions. He became the first Arsenal teenager to score ten goals in a single campaign since Nicolas Anelka did the same in the 1998/99 season.

The Brazilian attacker has an impressive workrate and an eye for goal. His ability to press is second to none in comparison with Arsenal’s other options in attack. He is good in the air and is blessed with a great deal of pace which allows him to leave most defenders for dead.

Based on how the North London club’s season is developing, they are screaming out for a player with Martinelli’s attributes and energy. They look devoid of ideas and intensity in attack. The Gunners have scored just ten goals in their first ten matches and you cannot win football games without finding the back of the net.

The fact that Martinelli is close to full fitness will come as a major boost to manager Mikel Arteta. During his pre-match press conference ahead of the club’s Europa League game against Rapid Vienna, he had this to say about the 19 year old:

“Gabi is another one that even in a moment of adversity, you see him training and everything he brings to the team, his energy, his passion, his motivation, is translating positive emotions to everybody.”

“He tries and goes and goes again and he wants to score a goal. He’s ruthless in training in every single action and the more players and staff you have to add that, at the end that gets translated to what happens on the football pitch and over time you will be stable.”

“Gabi’s pressing brings something different to the team and we need players like him.”

On how Martinelli will deal with the weight of expectation on his return, Arteta said:

“Time is the key word in this industry, and nobody is going to give you time! The moment the ball doesn’t go in the net and you lose a football match, you’re going to question all the rest, so with Gabi it’s the same. Now he needs time.”

“He’s done it for a period of time and in certain moments throughout a game, but consistently for three years, two or one? He’s never done it. I’m sorry, he’s never done it, so we cannot put that pressure on him.”

“It’s like with Bukayo and other young players that we have, they’ve never done it in their career, so why do you expect him to do it today? And in which environment? In which context? Patience, but he’s a positive guy to have back on the team because he’s such a character.”

Soon after he suffered his injury, Arsenal announced that they expected him to recover by the end of the year and it looks like he is on course to meet that deadline. He is likely to take a little longer to be involved in first team football considering he played his last competitive game for the Gunners in March when they beat Portsmouth 2-0 in the fifth round of the FA Cup.

Arsenal fans will be hoping his return to the fold will help the team rediscover their goalscoring mojo because without that, it will be a long, frustrating season yet again.