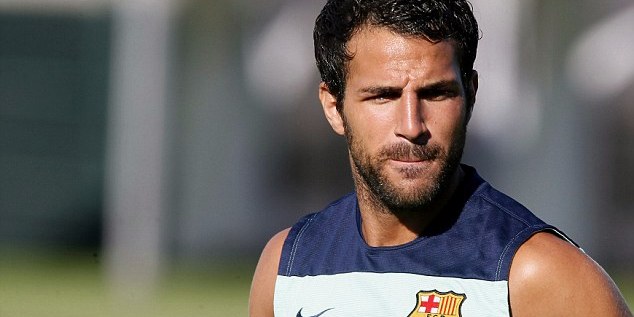 Premier League Champions Manchester United are preparing a third and final bid for Barcelona midfielder Cesc Fabregas, as manager David Moyes looks to add a creative spark in his midfield department ahead of the new season.

The La Liga giants are steadfast in their stance of not selling Fabregas and have rejected two previous bids of £26 million and £30 million respectively.  United are still looking to make a last ditch attempt to lure the former Arsenal midfielder and according to reports from The Daily Mail, the Red Devils are planning to put up a final offer, in the region of £35 million for the Spain international.

Should the deal go through, it would smash the previous record of £30.75 million Sir Alex Ferguson paid to land Dimitar Berbatov back in 2008.

Moyes feels that midfield is the only area that needs strengthening at the moment. The Red Devils have also been linked with Everton midfielder Marouane Fellaini  and Real Madrid star Luka Modric which suggests how desperate Moyes is to land a quality central midfielder.

With Darren Fletcher still not recovered completely, Anderson being inconsistent and Nick Powell still not ready to play week-in-week-out; the task has been largely bestowed on the shoulders of veteran Michael Carrick and young Tom Cleverley. Further, there is this need of replenishing the void left by retiring Paul Scholes.

Barcelona’s new boss Gerardo Martino insisted in his first press conference that interests from big clubs are natural for any top player, and from that ground Manchester United’s attempt to sign Fabregas is pretty normal, but the Catalan club is not interested in doing any business with regards to the midfielder.

The Blaugrana have already sold midfielder Thiago Alcantara to Bayern Munich and selling Fabregas would only weaken their own midfield, which the new boss probably would not entertain.

It has been reported that the former Arsenal skipper has told his friends about his desire to leave the club, but Fabregas publicly has always maintained the stance that he is happy at the club and has no intention of playing elsewhere.

Further, Arsenal might have a role to play in deciding the future of Fabregas, if by any chance Barcelona fail to resist the temptation of the United offer.

The Gunners may cash in the option of the first refusal on the player, where they will have the opportunity to make a counter bid and match that offer, should Barcelona accept any offer for the 26-year-old.