It seems like Liverpool have ended their interest in Sevilla defender Alberto Moreno and have shifted their target elsewhere. The Reds feel the price for Moreno is too high while harbour doubts over his qualities as well. 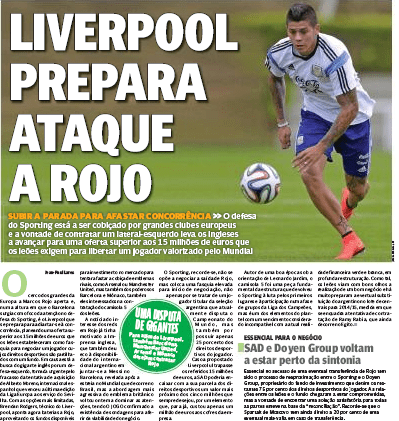 According to reports from O Jogo today, Liverpool have shifted their target to Argentine defender Marcos Rojo and are willing to pay more than €15m to secure his services.

Liverpool’s interest in Rojo is nothing new, with scouts having watched him on several occasions this season. Sporting, who owns only 25% of the player’s economic rights, are not ready to sell at the moment, as they want to wait until the World Cup gets over, because they believe his value might increase there.

Premier League giants Arsenal are also thought to be interested in him as Arsene Wenger wants to bolster his defensive options. Already Bacary Sagna has left the club and if the reports are to be believed Thomas Vermaelen might be heading for exit as well.

Interestingly, the report says Manchester United are also interested in signing him. To be honest, we have been following this saga for the past few months and this is probably the first time, the Red Devils are linked with him.

Liverpool need a solid left-back in the summer and have been linked with several defenders. Rojo, who can operate as a central defender as well, is emerging as a top priority for the Reds, after deal with Moreno has hit a snag.