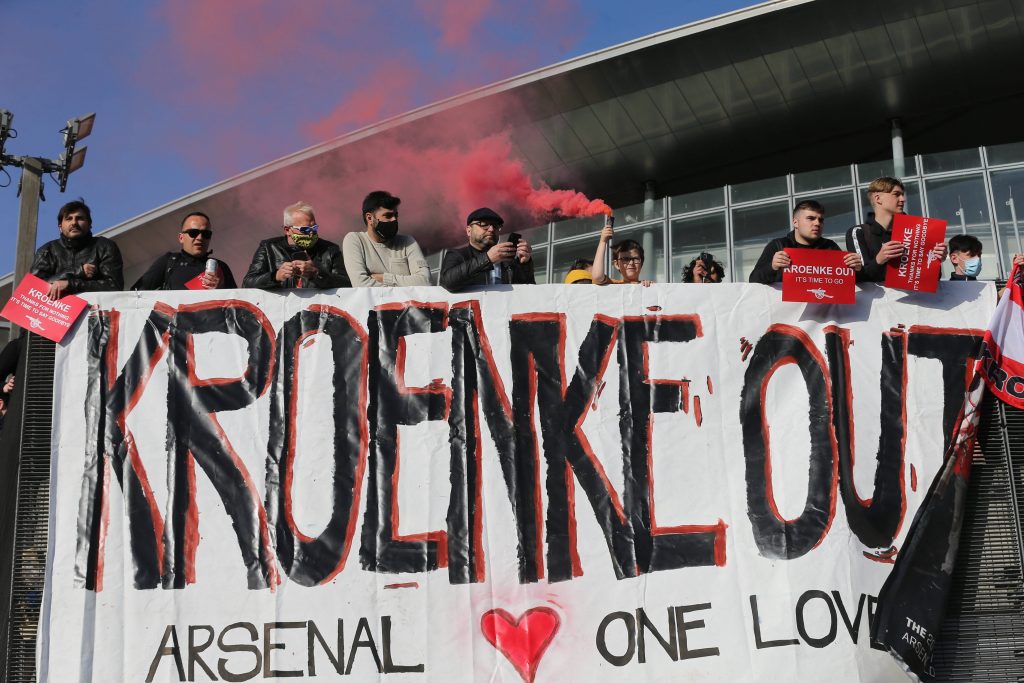 Arsenal fans gathered in thousands on Friday to voice their disapproval against owner Stan Kroenke following the club’s involvement in the proposed breakaway European Super League (ESL) earlier this month.

At the beginning of this week, the Gunners revealed that they were one of the founding members of the ESL, which led to fierce opposition from the fans, pundits, former players as well as politicians.

Within 48 hours, the north London club confirmed their withdrawal from the competition with an apology. The club admitted that they made a mistake joining the league without the approval of the supporters.

There has since been calls for Kroenke to sell the club, but on Thursday, Josh, who is the son of Kroenke and club director, stated that the Kroenke Sports & Entertainment (KSE) have no intention to do so.

It was always expected that there would be ‘KroenkeOut’ protests on Friday, and the fans came out in thousands at the Emirates Stadium calling for the end of the KSE ownership, which has paved the way for the club’s regression.

Look at how many people are outside the Emirates. Wow. #KronekeOut pic.twitter.com/77DBC7crIV

Gunners legend Ian Wright has recently been vocal about the lack of investment from the KSE. He emphasised that he is with the supporters on this matter and joined the protests by tweeting ‘KroenkeOut’ on his official Twitter account.

Josh has reportedly stated that the KSE plan to invest in the squad this summer, but it remains to be seen whether they are prepared to fund the transfer business with a big spending spree.

The lack of investment from the owner’s side has been quite evident over the past decade. Irrespective of whether the Gunners qualify for Europe or not, it could be a huge summer ahead after what is turning out to be the club’s worst-ever Premier League campaign.

Read: Arsenal need to pay around £40m to sign this Premier League midfielder.