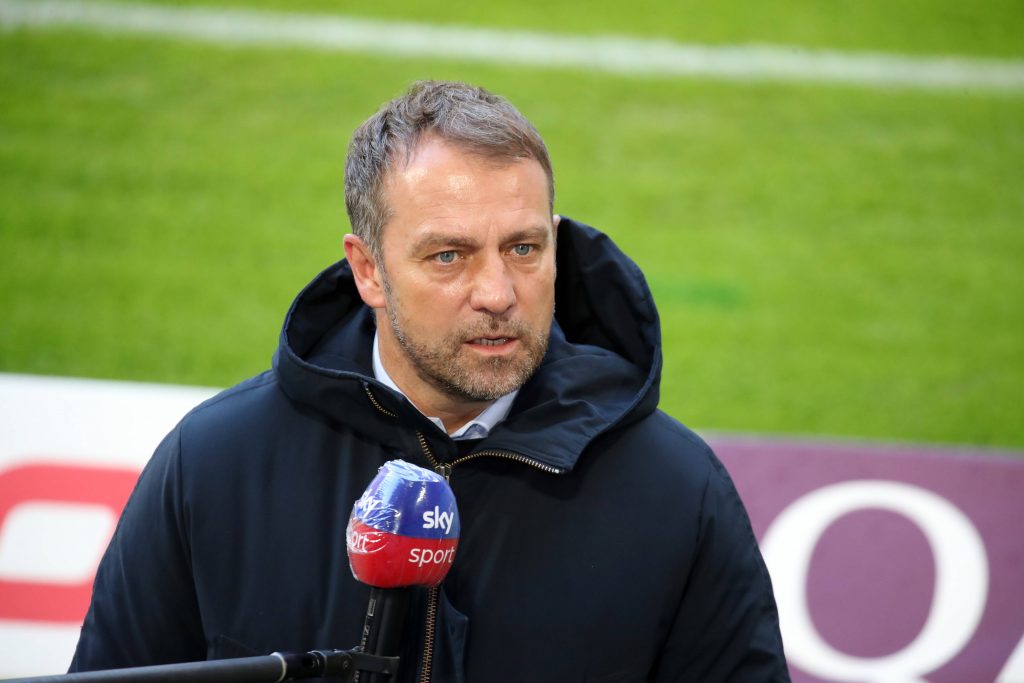 Hansi Flick has done an exceptional job at Bayern Munich, winning the treble in his first season, having taken over from Niko Kovac in November 2019.

This season, he has continued in a similar vein, sitting seven points clear at the top of the Bundesliga with just seven games remaining.

However, they have already been knocked out of the DFB Pokal and are up against it in the Champions League after losing the first leg of their quarter-final tie against Paris Saint-Germain.

It now appears that Flick is ready to take on a new challenge, with Norwegian reporter Jan Aage Fjortoft claiming on Twitter that he is set to take over the German national team after the European Championships this summer.

The 56-year-old previously worked as assistant manager for Die Mannschaft during their most successful period in recent times, winning one World Cup and reaching the semi-finals of every tournament from 2006 to 2014.

This will, of course, leave Bayern needing a replacement. But who could possibly follow a man who has been so successful? Let’s take a look.

The leading candidate for the hot-seat will be RB Leipzig coach Julian Nagelsmann.

At just 33 years of age, the German is one of the most attractive prospects in world football right now.

In his short spell in management, he has won German Football Manager of the Year in 2017 and came third in the UEFA Men’s Coach of the Year in the 2019/20 season after guiding Leipzig to the Champions League semi-finals.

This season, he has taken Die Roten Bullen to second place in the Bundesliga and could lift the first trophy of his career in the DFB Pokal.

Having suffered a rocky season, Jurgen Klopp’s position at Anfield is not looking as secure as it was at the start of the year.

With eight games of the Premier League season left to go, it is mathematically impossible for Liverpool to retain the title.

The Reds were also eliminated early in both domestic cup competitions and are looking unlikely to progress past the quarter-finals of the Champions League.

Despite this, there is no denying that Klopp is still one of the best managers around. If he were to become available, then Bayern would be silly not to take him on.

However, given his history with rivals Borussia Dortmund, a move to the Allianz Arena may be off the cards.

When it comes to the best managers in the world, Tuchel has somewhat gone under the radar over the last few years.

Last season, he was just one game away from completing an unprecedented quadruple with PSG. He also lifted the DFB Pokal with Dortmund in 2017 – to this day, the last piece of silverware they won.

And now, he has made a bright start to life in charge of Chelsea, putting them on course for a Champions League semi-final.

Tuchel has only been at Stamford Bridge for a few months. However, an offer from Bayern Munich may be too good to turn down.

Although, like Klopp, his Dortmund connections may block any potential move.

Joachim Low has already announced that he will be quitting the German national team after this summer’s tournament. It is unclear where he will go next.

Well, why not Bayern? They’re undeniably one of the biggest clubs in the world, and it’s tough to see them turning down a manager who has a World Cup under his belt.

When Kovac was dismissed back in 2019, the Bavarians appointed his assistant on an interim basis – that assistant being Flick. Maybe now it’s time to give it another go.

Hermann Gerland has worked at Bayern for over 20 years. He had a spell in charge of their amateur team in the 90s and took over their reserves in 2001.

During that time, he helped bring through the likes of Thomas Muller, David Alaba, Philipp Lahm and Bastian Schweinsteiger.

He has remained at the club since 2001, alternating from reserve team manager to first-team assistant. He was Jupp Heynckes’ right-hand man in the treble-winning season in 2012/13 and was also assistant for last season’s treble.

Given his lengthy spell at the Allianz Arena, no one will know the club better than him. And, having worked with the likes of Pep Guardiola, Carlo Ancelotti and Heynckes, the 66-year-old should have no lack of innovation.

Or, if they’d prefer someone younger, perhaps former striker Miroslav Klose would be up to the task. The Poland-born Germany international has also worked as Flick’s assistant since May 2020.