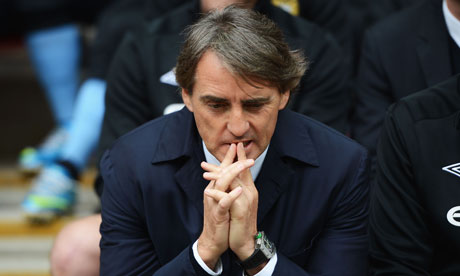 According to the Daily Mirror, the recently appointed Inter Milan manager Roberto Mancini has targeted four Premier League players to buy in January.

The player at the top of the list is Manchester City left back Aleksander Kolarov. Mancini was the one who brought Kolarov to England in 2010 and now wants to bring him back to Italy, where he spent three years at Lazio. The Serbian has only made six appearances in the Premier League this season as he continues to be rotated with Gael Clichy.

Another player Mancini is reportedly interested in is Erik Lamela. Lamela was a star for Roma during his time in the Serie A but found it much more difficult in his first season with Tottenham. Injuries and lack of form meant that he did not show what he was capable of. It was thought the arrival of fellow Argentine Mauricio Pochettino would help Lamela and it has. He has played in 11 Premier League games so far, scoring no goals but getting four assists. Last season, he only played in nine matches in the league, getting one assist.

The third player on the list is Liverpool striker Fabio Borini. The Italian was an important figure for Sunderland on loan last season. He scored key goals including the winner in both the Tyne-Wear derby and against Chelsea at Stamford Bridge. The Italian refused to re-join Sunderland on a permanent deal, opting instead to fight for his play at his parent club, Liverpool. However like fellow striker Ricky Lambert, appearances have been few and far between with manager, Brendan Rodgers, frequently choosing Mario Balotelli despite his questionable performances.

The last player is Arsenal’s Joel Campbell. The winger had a very good World Cup with Costa Rica and had spent 3 seasons on loan before returning to Arsenal for the start of the season. However like Borini, he has not had many chances to play. He has not started a Premier League game this season and has just made two substitute appearances.