Sources close to Real Madrid are suggesting out-of-favour shot-stopper Iker Casillas is considering his future with the side.

Real Madrid goalkeeper Iker Casillas lost his place in the La Liga side midway through the 2012/13 season after succumbing to injury. And under former manager Jose Mourinho, he was continually overlooked even after returning to full training.

Diego Lopez was given the nod over the Spanish international last season, and has even more surprisingly kept the number one jersey so far during the 2013/14 campaign – making two appearances.

New manager Carlo Ancelotti revealed how he’s happy with the performances shown by the one-cap Spaniard pictured, and will continue to play him if he keeps it up.

Casillas’ last La Liga appearance for the Champions League semi-finalists was a 5-0 victory over Valencia in January.

With the 2014 World Cup approaching next summer, the 32-year old is said to have been considering his future with Madrid – as he needs promised playing time to put himself in contention of making the Spain squad.

Before the summer transfer window closes, he could well have two sides in the Premier League keen to produce his signature. Arsenal and Manchester City may well be in the market for a new number one ‘keeper – after Wojciech Szczęsny and Jose Hart respectively have both been guilty of making costly errors early on into the new season.

Whether or not Real Madrid would actually consider any offers put to them for Casillas remains to be seen, but it’s clear the long-serving player is far from happy with his current situation. 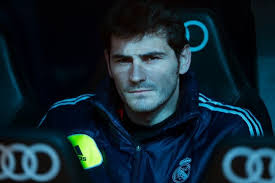 At 32, he’s in the eve of his career, but may still feel he could have enough years ahead of him playing at the top level. While Lopez has earned his number one spot on merit, seeing a goalkeeper of Casillas’ vast experience sitting on the bench is surely a waste.

With the transfer window closing in less than a week, could there be a shock move on the cards for Iker Casillas?